Memories from the Mother Road

Don’t lose track of your older friends because you can’t replace them.

Two guys in a Mustang convertible, top down, getting their kicks on Route 66.

No, not Tod and Buz in the popular 1960s television series “Route 66.” They drove a Corvette, anyway. We’re talking about Jim Miranda, Pleasanton, California, and Bill “Skip” Haynes, Eugene, Oregon, Gonzaga friends who earned business degrees in 1964 and later explored nearly every section of the 2,448-mile old highway that preceded America’s Interstate freeway system, and connected Chicago to Los Angeles.

Undaunted at age 82, these two explorers are planning their fifth trip along Route 66 in April. What’s not to love . . . the smell of cooked bacon and percolating coffee in old-time diners dotting the road. And the sense that Clark Gable was there in the Boots Motel, where he regularly stayed in Carthage, Missouri.

“Or the smell of trees, the rhythmic clicking of tires on the highway and the sound of small branches brushing the windshield on a stretch of abandoned, decaying and nearly overgrown pavement in Oklahoma,” says Skip (in this story, it seems far too formal to use last names to identify our characters).

“Remember the picture of you sitting on the road by a painted Route 66 sign, tar-patching stripes making the concrete look like a jigsaw puzzle? I remember that smelling like some exotic combination of oil, rubber and dust,” Skip adds. 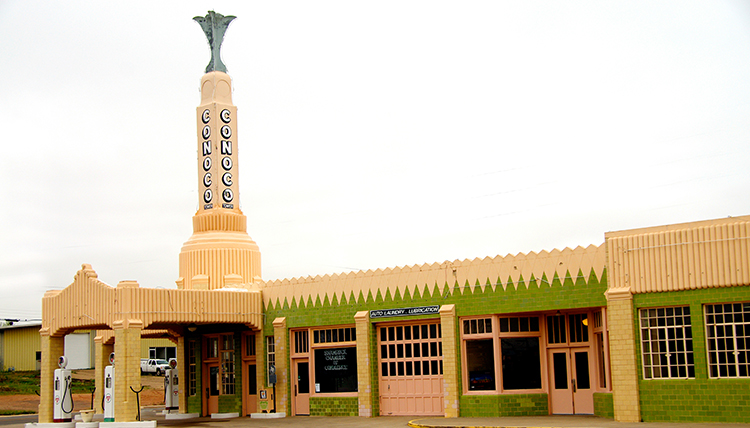 Only Way to Travel the Country

These two Zags always travel with the top down, never exceeding 35 miles per hour while traversing the “Mother Road.” Mind you, the Mother Road varies, from four-lane arterial to crumbling pavement to gravel and dirt. And at some points, perhaps where a bridge once spanned a river, the roadway disappears altogether.

“But the real beauty of Route 66 is the wonderful people we meet,” Jim says. “Amen to that,” Skip confirms.

The road is rapidly deteriorating, but kind-hearted people are passionate about restoring as much of it as they can. “I hope there will always be people like these who are striving to restore what we had, and preserving a history of who we are,” Skip says.

Everywhere they go they eat at classic diners and sleep in historic motels.

“We stumbled across an old motel in, I think, McClain, Texas, called the Cactus Inn,” Jim says. “We struck up a conversation with the gal running the place by herself and asked if we could take a picture with her in front of her motel by our Mustang convertible.

So, Skip sets up his camera, asks us to move a little closer together, and Peggy says, ‘Hold on, I’ve got to take my pistol out of my pocket . . .’ ” and she lays it on the hood of the car for the picture.

And that story flows into the next.

“We were with Jerry McClanahan at his art studio in Vinita, Oklahoma,”Skip says before Jim interjects, “No, I think it was actually in Chandler.” Skip continues without a pause. “He authors a book called ‘EZ 66,’ considered the route’s best guide. He travels Route 66 every three years to update his handdrawn maps of the roadway. They are extraordinary.”

Jim’s turn: “Another memorable stop was the Packard Museum, in a converted Afton, Oklahoma, gas station, full of classic Packards and Studebakers. There’s a gal there named Laurel. She
let us sit in and photograph a very rare 1912 Packard.” 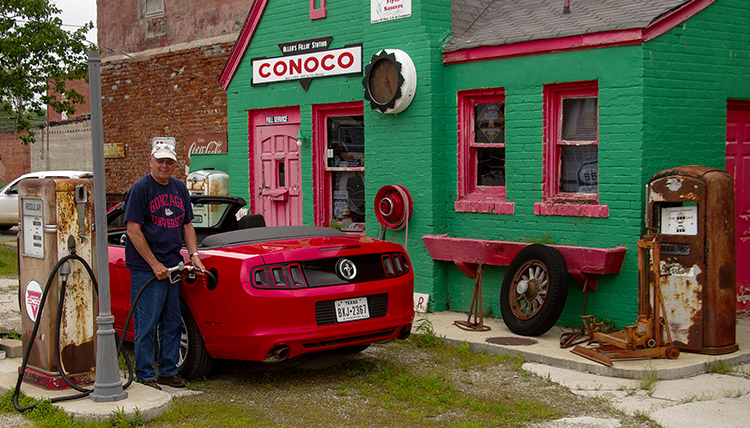 These two find that the road is a great place to catch up on each other’s lives and reminisce about the old times, Jim says. “There’s great value to talk with someone who understands everything you’re saying,” Skip adds. They only occasionally listen to music, and the only music they play is a CD of 1950s songs one of the wives made for them.

What are some other “favorites” from their travels? “There’s a famous ice cream joint in Missouri, can’t come up with the name, but it was about 100 degrees when we stopped,” Jim says.

“Speaking of weather,” Skip interjects, “two trips ago we drove through Oklahoma, and we could see tornadoes hitting behind us.”

Favorite hotel: Skip pipes up, “I’ll bet you a drink, Jim, that we’ll say the same place. The Blue Swallow in Tucumcari, New Mexico.” Jim concurs, adding “It’s on the national registry of historical buildings.” Adds Skip, “It’s so authentic. They still have rotary dial phones. Everything is painted scenically to match the area. And the classic neon sign out front is huge.”

“We see a lot of old ruins along the way,” Jim recalls. “We can’t help but feel how much those Route 66 travelers sacrificed to follow their dream for a better life out west. On one desolate stretch of dirt road, Skip and I saw an abandoned tire that must have gone flat, along with a couple of empty oil cans. We could almost feel the sense of despair that came with being stranded, probably in the ’30s, in such a lonely place. So many reminders of the hardships people faced every day along their journey.”

These men feel blessed to be healthy at their age, full of adventure, have the blessings of their wives to do these 10-day jaunts (and to make these trips in a rented red or silver Mustang convertible).' 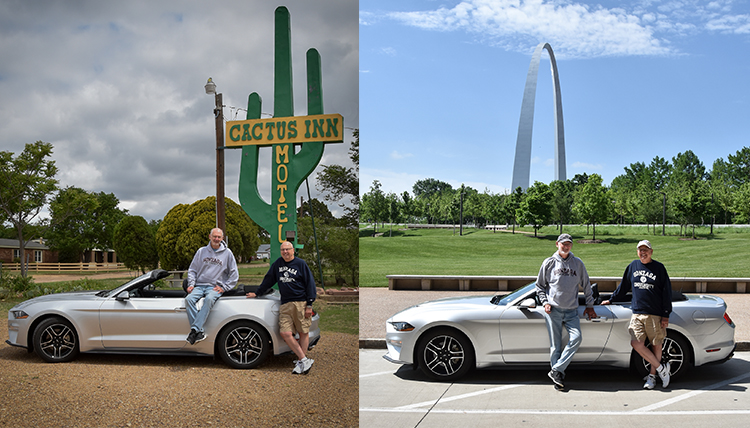 Both Jim and Skip grew up in Spokane, and served a military stint before enrolling at GU in 1960. “We stood out a little because we were older than the other students,” Jim remembers.

Both lived at home to make ends meet, and worked to put themselves through school, Jim parking cars at Firestone and Skip selling shoes at Kinney’s. Jim was an accounting major, Skip studied finance/economics. Both had cool cars, Jim a ’55 Chevy and Skip a ’56 Ford convertible. Later, Skip bought a Corvair Monza which they drove straight through to Tallahassee, Florida, where Skip was taking one semester of classes. Made it in three days. Jim caught the first available train home. That was their first long trip together.

Now, with maturity, they’re allowing more time and stopping to smell all the scents, see all the sights, and experience all that made the 1930s, ’40s and ’50s a huge part of American lore. And having the time of their life, getting their kicks on Route 66.

“I think the most important message is, don’t lose track of your older friends because you can’t replace them,” Skip says.

“What we have is more like a brother relationship at this point,” Jim says. Skip’s retort, “You took the words right out of my mouth, Jim.” 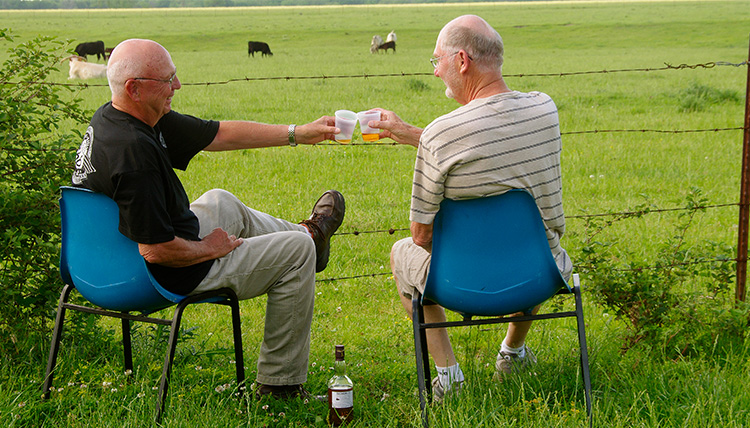 Be part of the Gonzaga story. Respond to a what you read in a variety of ways:
Readers Care
Share Story