The Impact of the Kennel Club

“Do you want to know the true impact of the Kennel Club? Ask a Gonzaga graduate from the past three decades what they remember most about their time at GU, and I bet one of the first things they mention is the Kennel Club." (Mike Shields)

What started out as an effort to chronicle the early origins of Gonzaga University’s Kennel Club in pamphlet form turned into a full-fledged book on Gonzaga’s largest and most celebrated student club through the last 34 years.

Mike Shields (’84), one of the Kennel Club founders, and Aaron Hill (’01), a former men’s basketball student manager and later an Athletic Department staffer, put their heads and hearts together to create a compelling and insightful look into the club’s storied evolution in “We Are G.U.: The Origins, History and Impact of Gonzaga University’s Kennel Club." 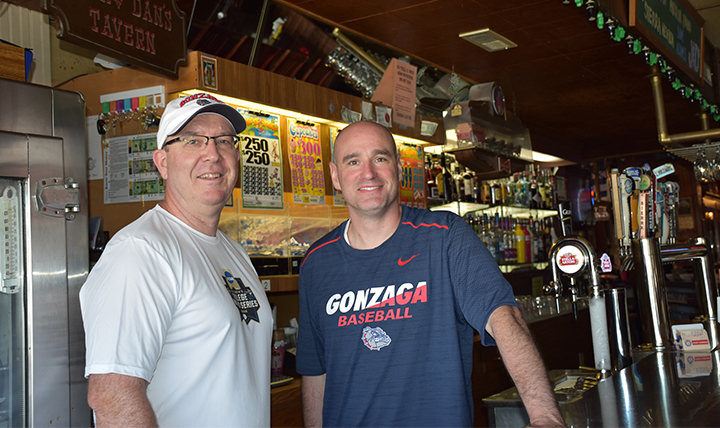 Pictured: "We Are G.U." coauthors Mike Shields and Aaron Hill

The club’s story, which began with a handful of Shields’ close friends and the Gonzaga baseball team, has grown into membership today capped at 2,500 and nationally recognized across the collegiate basketball world. This story is not unlike the story of the University. The people, commitments, personal sacrifices, lifelong friendships, and, of course, the antics of college-age fans, are all told in this 180-page narrative of their Gonzaga Experience.

For a long time, Shields, 56, thought about writing a story on the founding and early days of the Kennel Club so that history wouldn’t be lost. But it wasn’t until Hill, 38, contacted Shields through a mutual friend that the book took on a life of its own. Hill was teaching abroad in Milan, Italy, with a fellow from South Carolina when the Zags and Gamecocks were matched in the 2017 Final Four semifinals. The South Carolinian told Hill he was glad they weren’t playing at the Kennel in Spokane as he had heard about the veracity of the Kennel Club, “started by the rugby team.”

Hill couldn’t let that faux paus pass – baseball team, not rugby. He talked to KC co-founder Jeff Zenier about creating a book, and Z put Hill in contact with Shields. Hill and Shields had never met, but agreed to co-author the story through a series of emails and phone calls. It wasn’t until July 2018 that they met in person after 15 months of work together, and a lifelong bond was formed.

These two went to great lengths to pull together the stories and events that made the Kennel Club such a popular feature for fans, and home-court advantage for the basketball teams.

Spokesman-Review columnist and longtime Bulldog beat writer John Blanchette says in the book’s Foreword: “. . . the rush from any of those (spectacular) plays is enhanced by the reaction of the eyewitnesses – roars that bow the walls, the animated delirium, the chants that tell the opponents they’re down by 30 and the team bus is idling outside. And let’s not forget getting in the visitors’ heads in the warmup before tipoff.

“By pretty much consensus acclaim – from Zags players, assorted basketball meteorologists in the media, and yes, the members themselves – the KC is among the best at this particular craft in the country.”

Shields and Hill went to extreme measures to collect impressions from personalities around the country. Shields shared his story in tracking down ESPN Game Day co-host Digger Phelps through retired Mariners’ pitcher Jamie Moyer, whose wife Karen is Phelps’ daughter. “I had a call from Digger within an hour. He says, ‘Hi Mike, Digger. You need a quote? Grab a pen.’ He couldn’t say enough nice things about Gonzaga, its students and Coach Mark Few. I asked him if he could put me in touch with Dick Vitale. He responded, ‘Mike, Digger here. Grab a pen.’ Within an hour Dick responded to my text message. He had no reason to honor us with his reply, but he did. And any time we knocked on a door of anyone associated with Gonzaga, we got a great response,” Shields says. 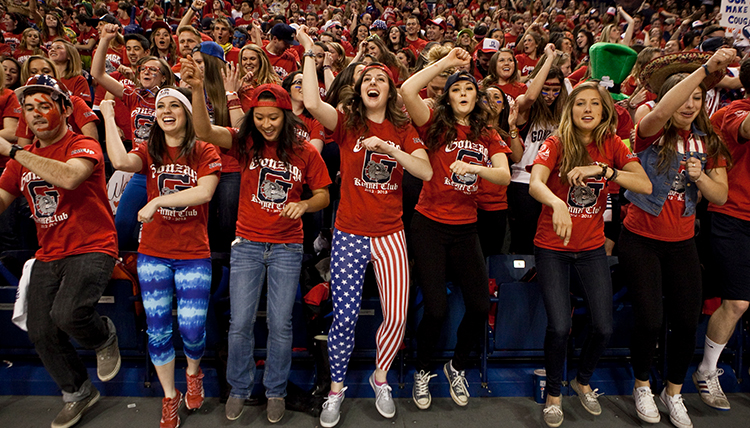 The book includes pictures of every KC shirt over the life of the club, and stories from every generation of KCers, including marriage proposals, halftime routines and times when the KC stepped over the line and had to be reined in. But in the end, this is the story of college kids who found delight in helping their teams find success. The winning percentage in the Kennel is almost 93 percent. Don’t ever try to convince anyone who’s witnessed a game there that the Kennel Club didn’t have an impact. But more than the wins, it is the camaraderie in a shared purpose and dear friendships made over the years on the lower north concourse of McCarthey Athletic Center, and the Martin Centre before that, that makes this story particularly poignant.

The book, animated with more than 170 photographs, is on sale at the Zag Shop and its booth inside the Kennel, as well as online at gonzaga.edu/ZagShop.

About the authors: KC co-founder Mike Shields, Gig Harbor, Washington, earned his bachelor’s and worked toward a master’s degree at Gonzaga, serving as administrative assistant to the baseball program. He serves as director of corporate partnerships for Goodwill of the Olympics & Rainier Region. Aaron Hill, Gainsville, Florida, earned both bachelor’s and master’s degrees from Gonzaga and was basketball manager when the Zags began their current 20-year run in the NCAA Tournament, beginning in 1999. He is assistant professor at the Warrington College of Business at the University of Florida. The authors took on a third partner, GU English assistant professor Jeff Dodd, who designed and laid out the book.