Paddles and Pens: Two Weeks on the Missouri

Between the River and the Sky

When I first received the email, I was sure there was a typo. The Missouri River… in Montana? I’d spent lots of time on the rivers in Montana and had never heard any mention of the Missouri. Still, I was intrigued by the rest of the message: two weeks, 150 miles, all done in canoes. It sounded like the ultimate adventure, so I applied for the job without hesitation. Later Google searches revealed a stunning landscape framed by sandstone cliffs and peppered with the remains of teepee rings and early-century homesteads. The sky stretched as far as the eye could see, with the mighty Missouri slicing through all of it.

The morning of May 23, we packed up the canoes, snugly strapping our gear in between the thwarts. I stepped back and watched the action, realizing all we’d need for the next two weeks was sitting in those six boats. We scrambled around, finding last-minute spots to store propane canisters, water jugs, and of course, all our snacks. It was stressful – I was convinced something wouldn’t fit, or that we’d waterlog the food bins while we were loading. As soon as we pushed off shore, however, the frantic morning dissipated. The water was calm, the only sound the quiet sizzle of sand as our canoes sliced through the silty water. I leaned back and let the hot sun hit my face. If we’d missed anything, it was too late now and we’d have to do without. We were on the river. 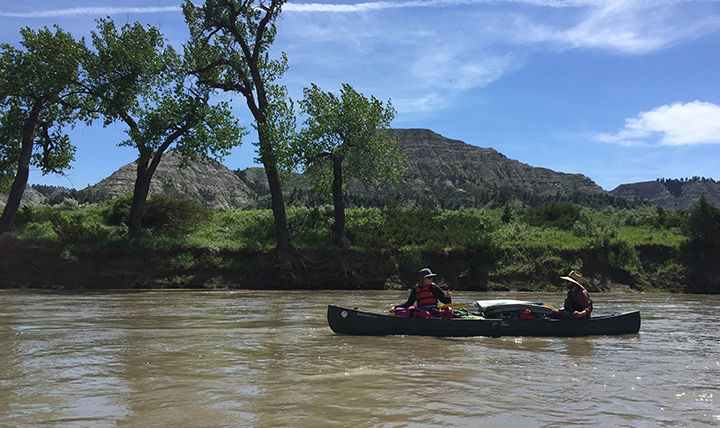 Our second day on the river brought us to the famed White Cliffs, a section bookended by tall sandstone cliffs on either side. Bald eagles sat perched on outcroppings, surveying us as we passed. Our campground was nestled in the cottonwoods directly across the river from a gaping valley between two cliff faces. We unloaded the boats and threw ourselves down in the shade, palming trail mix and smashed PB & J sandwiches. After lunch, we geared up for an afternoon hike in the hills behind camp.

What we found was nothing short of spectacular. A slot canyon, complete with the decomposed carcass of a deer that presumably got caught in the last flash flood. Cool canyon walls hugged us, squeezed us, and we continued meandering along until the trail became impassable and we scrambled up on top of the mesa. “It looks like there should be dinosaurs here,” mused one student, and I couldn’t agree more. We scattered ourselves around the plateau and laid on the scrubby ground for a meditative writing exercise. The wind tickled my ears and the musky perfume of sage drifted through the air. I felt safe.

Later that evening, I stood at the camp stove and stirred a pot of quinoa while watching the pink sky fade behind the cliffs in front of us. The sounds of the evening echoed around me: the humming insects, the rustling of the cottonwoods in the breeze, the soft splash of a fish in the river. It was thoroughly, entirely, peaceful. We sat on the ground in a circle, happily tucking into warm bowls of stir fry. “Food tastes so much better when you eat it in a place like this,” I said, and the group unanimously agreed. It’s true, but eating in great company after a magical day on the river doesn’t hurt either.

The next ten days passed much the same. There’s some sort of comfort in waking up every morning and knowing exactly what the day will hold; we spent the day wondering if camp would be on river right or river left. Yet there were surprises every day: a beaver swimming along the canoes, fossilized seashells just off the trail, and extra Oreos after dinner!

Two weeks in the backcountry is no easy feat, and there were certainly lows that we reached as a group. A few campgrounds were closed for eagle nesting, forcing us to push on and on to the next available site. The mosquitos were ferocious at times. There were a couple of nights of rain, waking us up to soggy gear. Each time we reached a new low, the group would rally and we would soldier on, tackling every obstacle with humor and grit. And for a 30-mile canoe day ending in a looming thunderstorm? We had Skittles. 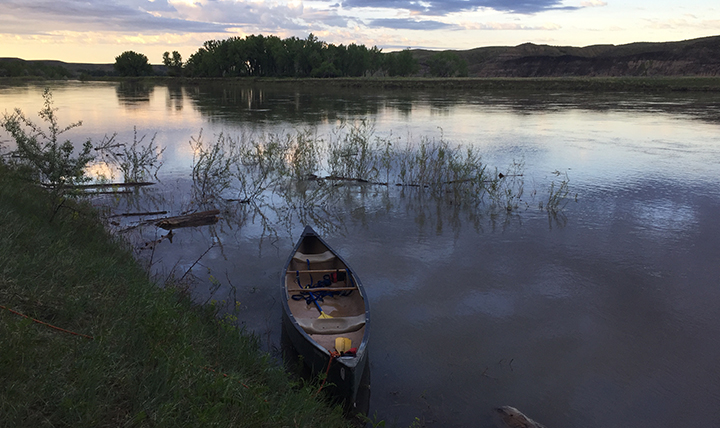 Somehow between the paddling, hiking, loading and unloading, we fused into a family of sorts. Long hours on the river provide ample time for talking, really talking, and all 12 members of our group learned as much about each other as we did about the places we were visiting. We looked out for each other too, making sure there was enough instant coffee and double-checking tent stakes before bed. I relished the relationships we forged over two weeks without the distractions of technology, or even any other people. Out there in the Missouri Breaks, it was just us and the sky.

The last night on the river came much too fast. We sat among the yucca up in the grassy expanse behind camp, shaded by a sandstone pillar. The dying sunlight had turned everything to gold, and our eyes were closed, remembering the last two weeks. There had been jokes about the groover, breathtaking climbs to Archangel, the aptly-named rock formation, and the joys of clean underwear and raspberry lemonade. There had been raw storytelling moments and mud-covered Chacos and finding community in the middle of Montana. Above it all, there had been the river, the steady and silent 13th member of our little tribe. 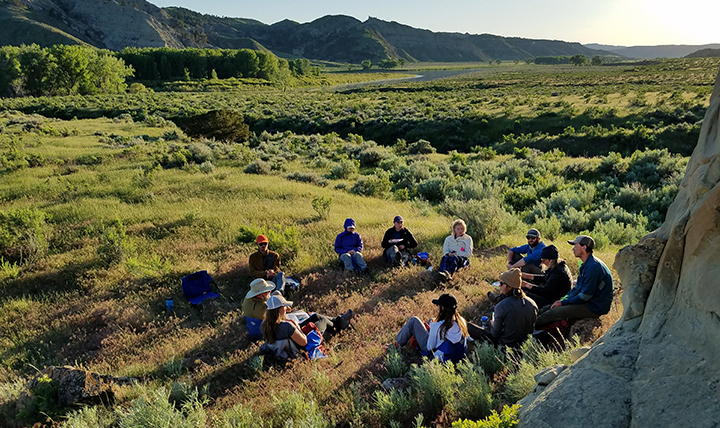 On our drive back to campus, we passed the river takeout from the end of our trip. I noticed the sign and pointed it out, then went back to the road and the small talk. A while later we passed the exit to Fort Benton, where we’d started our journey. I startled. In just a little over an hour, we’d covered the entire distance of our trip in the van. I looked out in the direction of the river. The short drive made it all feel so… insignificant. As if that much life couldn’t possibly have been lived out there. As if our time on the river had been removed from time and space, worlds away from this ribbon of highway through the plains.

And in a way it had. Not many people have the chance to uproot themselves from the rhythms of daily life and plant themselves firmly in the wilderness. Out there along the river, I felt miniscule, just one body standing somewhere between the earth and the sky. And yet, I’ve never felt so at home. Nature has a way of revealing the important things in life, and on the river those things are pretty simple. Some tasty snacks, a full water bottle and a sunhat will do the trick. And along the Missouri River, a canoe and a healthy dose of adventure won’t hurt, either.

The trip down the Missouri marked the second year the Gonzaga in the Wilderness program took students on a field immersion trip. It provides a unique experience that allows students to study abroad in the backcountry. Gonzaga Outdoors Program Manager Matt Edenfield is deeply involved with the program, from coordinating logistics, ensuring student safety, and delivering outdoor education curriculum in the field. He believes Gonzaga in the Wilderness is a great way for different departments on campus to collaborate on experiential learning opportunities.

“One cool, collaborative piece of the program is that both parties have a lot of experience with either the curriculum or the environment, and those aren’t mutually exclusive between the professors and Gonzaga Outdoors,” he says. According to Edenfield, students benefit from field immersion programs in ways they can’t in a traditional classroom, including fewer technological distractions, forging a connection with the land, fostering a supportive learning environment, and encouraging students outside their comfort zones.

Going forward, Edenfield is hoping for more opportunities for more students to participate in field immersion programs. He’s hoping Gonzaga Outdoors can be a resource for any program that wants to incorporate wilderness exploration into their curriculum throughout the academic year. “As a university, if we want to promote environmental stewardship, students have to build some sort of relationship with those environments,” he says. “This learning  must happen outside the classroom.” Combining classroom learning with outdoor adventure might just be the key to doing that.