Deep Sea Diving with the Jesuits

When you first meet Kyle Baker, you may not believe that he is a Jesuit. With hair down to his shoulders, cargo pants, hiking sandals and a laid-back demeanor, Baker seems just like any other student seeking friendship and faith in Gonzaga’s University Ministry (UMin).

In a way, though, Baker is a student. In August 2016, he joined the Society of Jesus as a novice, realizing that he knew very little about the religious order itself. Since then, Baker has tried to approach his experience from the perspective of what Buddhists refer to as the beginner’s mind. It’s that simplicity which he carried into his time at Gonzaga.

The Road to Realization

Before even contemplating becoming a Jesuit, though, Baker was a saint. A Carroll Saint, that is. Baker spent his undergraduate days playing football for Carroll College in Helena, Montana. He first experienced Catholicism through the football program, as the players and coaches attended Mass together every day before a game. “My God-awareness emerged pretty suddenly after that,” Baker says.

After exploring his faith quietly, Baker eventually became more profoundly drawn into Catholicism. He converted to Catholicism through the Rite of Christian Initiation of Adults, but continued on a “traditional career path,” obtaining a master’s degree from the University of Notre Dame.

After seven years of working with and in school systems, Baker returned to Carroll as Chief of Staff, an opportunity he says gave him a chance to serve a school for which he really cared. As fate would have it, Baker became close with Carroll President Tom Evans and his family. One afternoon, the president approached Baker, telling him that he reminded him of the Jesuit priests he had known at Georgetown University and Holy Cross priests at St. Edward’s University. “I told Tom, oh I don’t know if that’s for me,” Baker admits. “But he pushed me harder than anyone had in the past. He wanted me to think deeply about it.”

And Baker did. He began reading more about what a life in a religious order would look like. Though his research was helpful, a pilgrimage in Italy and a conversation with a German surgeon who had become a Franciscan after serving with Doctors without Borders was the tipping point for Baker. He could not stop thinking about his own desire – a deep desire to live a life of service. “I began to reflect on how my close friends were starting young families and realized that I actually wasn’t sure if I wanted to get married and have a family,” says Baker. He finally engaged in the idea of becoming a Jesuit.

In his first year as a Jesuit, Baker had to learn how to “deep sea dive,” which meant living in the Jesuit community and reflecting on his personal spiritual formation. Though Baker had done some reflecting during his lifetime, now it became his job – and a gift. He decided that the best way to do this would be to work from the mindset of a beginner, and as if through divine intervention, Baker lived in Room 101 while in the Novitiate.

Throughout his first two years, Baker also engaged in various work assignments. He served as a co-chaplain in a juvenile detention center in Los Angeles, a classroom aide at Verbum Dei High School in Los Angeles, then a homeless shelter in Tacoma.

Along the way, he encountered a couple of Gonzaga’s most active Jesuit alumni – Father Greg Boyle of Homeboy Industries (Los Angeles) and Father Pete Neeley of the Kino Border Initiative (Nogales, Arizona).

Accompanying a fellow novice at Homeboy, Baker served on the bakery crew, rolling bread dough and making bread for a few sacred days. In those moments, Baker found himself thinking about the preciousness of baking bread that others would break and share, and how that related to the vulnerability shared in his conversations with the bakery crew, made up of formerly gang-involved men and women. 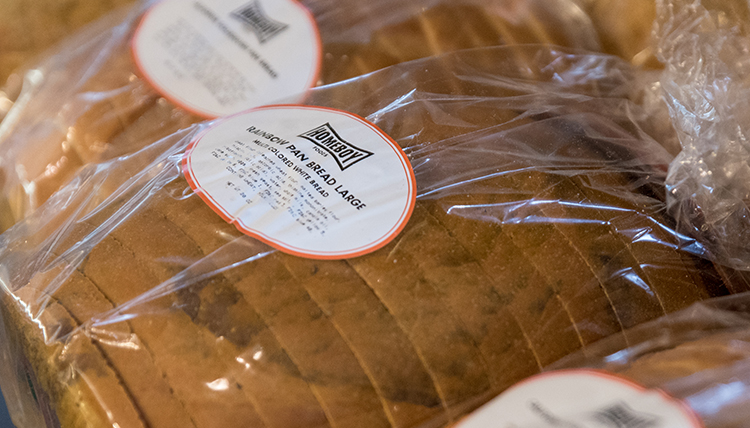 At Homeboy, Father Boyle fosters the imagery of the prodigal son. “Father Greg has created this ‘relentless welcome’ that is modeled on the community Jesus built.”

Following that was an experience with Father Pete Neeley who ministers to migrants at the Arizona/Mexico border. It was his novice pilgrimage, a month-long initiative that gives novices the opportunity to develop a deeper sense of trust with God and others. Baker knew he wanted to go to the border where he could serve people caught in the jaws of migration policy and immigration. “Having grown up in Coeur d’Alene, I wanted to inform my frame of reference through personal encounter.”

For three weeks, Baker worked for the Kino Border Initiative in the comedor, serving meals, passing out clothes and administering basic first aid to migrants alongside Father Pete, Father Sean Carroll, Padre Samuel and the Missionary Sisters of the Eucharist. All four had a special impact on Baker during his time at the border.

Father Carroll taught Baker that human beings should not and cannot accept things that are a violation of what is known as justice in the Gospel, and that as fellow humans, it is our duty to advocate. Father Neeley helped Baker see the need to humanize, accompany and complicate his understanding of migration and border issues

A specific encounter with Padre Samuel left Baker in awe. During the Easter Triduum, Padre Samuel invited Baker to accompany him to Buenos Aires, a barrio known for its poverty and violence, where they were to celebrate Mass. During the service, Baker says that Padre Samuel truly spoke with prophetic words of the hope of the resurrection. “He had a deep passion for being a pastor and a shepherd.”

Finally, the Missionary Sisters of the Eucharist taught Baker about the deep sense of service companionship can bring. He remarks that not only were they funny, tough, intelligent and deeply spiritual, but they were also inviting and encouraging – undeniably great human beings.

As Baker arrived at Gonzaga’s “doorstep” in January, he already knew some of what to expect based on his experiences at Homeboy and Kino. Both Father Boyle and Father Neeley provided remarkable examples of cura personalis – care for the entire person. “It makes perfect sense to me that they were part of this community,” says Baker.

And Gonzaga’s mission is not solely played out by influential figures such as Father Boyle or Father Neeley. Baker knows that Gonzaga’s campus strives to put people out in the world who believe in the mission, those willing to walk with those that no one else will walk with. “They might not get a cover story or start an organization, but each student and alum is weaving a piece into Gonzaga’s rich tapestry.”

Leading a Life of Fullness

While at GU, Baker was a source of support for students, faculty and staff. “I’ve come to know Jesus as a presence of healing and reconciliation and leads us to a fullness of life,” he adds. “I don’t need to walk around with a cross in my hand, but I want to be representative of that presence.”

In being a part of the Jesuit community, Baker finds that doors open wide. He says that his favorite part of being a Jesuit is being invited into the most intimate moments of people’s lives – the biggest joys and the immense sufferings. Not every encounter is profound, yet Baker still sees his conversations with people as sacred and powerful. The secret? Baker says that it’s the simple concept of being kind and present. “It’s part of who I’m striving to become as a Jesuit.”

After Gonzaga and professing his perpetual vows in August (see “How to Become a Jesuit 101"), Baker heads to Fordham University to begin his philosophy education, a required part of the Jesuit journey. We wish him the best in keeping that “beginner’s mind” even as he shifts his attention to academic rigor and growth.

So what exactly does the process of becoming a Jesuit look like from start to finish? Novice Kyle Baker and Jesuits New England Province website  explain:

Novice Jesuits live in community, learning the traditions of the Society of Jesus. Additionally, novices engage in a variety of “experiments” which mostly involve service to the poor and vulnerable. For Baker, this included his time in Los Angeles and Tacoma, as well as Nogales and Gonzaga.

At the end of two years – August 11 for Baker – novices are invited by the Provincial to take the perpetual vows of poverty, chastity and obedience in the Society of Jesus.

No longer novices, Jesuits in First Studies are considered scholastics, doing exactly what the name implies – studying. For the next three to four years, scholastics work towards a degree in philosophy and theology, in addition to providing apostolic work in the surrounding community.

Once a Jesuit has completed his degree in First Studies, the next step is Regency, which according to Baker is “historically a teaching position, but has been expanded to include social work or counseling.” Regency takes approximately three years to complete.

The Church requires four years of theology studies for priesthood, which Jesuits complete during a three-year period leading up to their Master of Divinity degrees. As with previous phases, Jesuits will also engage in service to their communities through pastoral ministries at this time.

Toward the end of a Jesuit’s final theology studies, he will first be invited to become a deacon, and then eventually to become a priest.

The final phase of becoming a Jesuit lies within tertianship, which the Provincial invites men to partake in once they complete their theology studies and have served in ministry for three to five years. Tertians mirror their experience with what they encountered in the novitiate, studying Jesuit foundations and participating in an apostolic experiment (usually in a third world country).

Finally, after the tertianship period, a Jesuit takes his final vows in the Society of Jesus.