A Conversation with George Critchlow, Professor Emeritus and Travel Author

During the summer of 2016, Professor Emeritus George Critchlow took a road trip just after he retired from the job that he had held for over 35 years. After leaving life as a Gonzaga Law professor and former Dean, he took a two-month journey from Spokane through the Southwest and Midwest and as far south as New Orleans. His brave companion on the road? A 1999 Ford Coachman camper van he christened Vamper.

Such is the set up for Critchlow’s new book, Travels with Vamper: A Graybeard’s Journey. Gonzaga Law staff member Anna Creed recently sat down with Critchlow to discuss the book, the inspiration behind it, and more. This conversation has been edited for length and clarity. 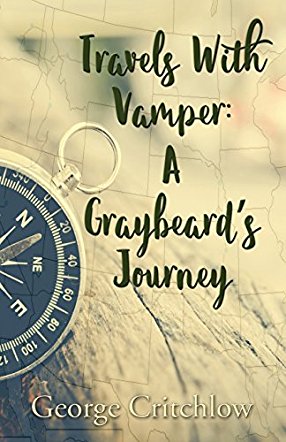 The way you’ve organized the memoir, you take the reader for jumps in time and space. It isn’t purely chronological. Is there an overarching theme that you used to bring all these disparate places and times together?

I intentionally decided to use the travelogue as a metaphor for my life’s journey. It’s why I titled it Travels with Vamper: A Graybeard’s Journey. And I thought, given that I was using the road trip as a framework and a vehicle to talk about larger issues, I would go back and forth in time and space, to other experiences.

This has been very much part of my profession all my life. I kept running into those ideas as I was travelling.

In your book, you briefly discuss Kit Carson and his legend. You seem to be interested in who he was as a human being rather than as a cardboard cutout, as you describe him. Why did he grab your interest?

I kept running into [the history of] Kit Carson and thinking “Who is this dude?” I think the reason I ended up writing about Kit Carson is because I visited Santa Fe and Taos and that’s where Kit Carson lived.

There was a museum there, a lot of Kit Carson stuff, but I started thinking about Kit Carson long before that. And I remember talking to this guy, who I write about, in a bar in California who was going on and on about California history. And much of that history intersected with Kit Carson as he became less of a gunslinger and more of a go-to guy for the government. You know, they hired him as an Indian agent and all of that.

And I thought, man this guy had a really interesting life, I’d like to read more about him. Because either he was just a guy whose life started killing people, including Indians, because it was culturally permissible, or he was something else. And I wasn’t sure. And at the end of my very short chapter on Carson, I included a quote from a young Navaho man who was himself quoted in a biography of Kit Carson: “It depends on whether you’re a white dude or an Indian.”

So have you always questioned society’s heroes and demons?

I think so. I need to question more. I like to remind myself that my personal heroes, probably, like all of us, have imperfections that need to be looked at and understood. But yes, I think for the most part I’ve learned as a lawyer and as a thinker to try to be skeptical when skepticism is called for. And when I’m skeptical, it doesn’t mean that I’m making a judgement. It just means, maybe I need more information about this. I need to dig a little deeper.

So as I was writing my book, I didn’t want to write just about how beautiful the Rockies are. Or write about Lewis and Clark in terms of “Oh wasn’t this a nice, interesting trip that was so challenging for these guys. They ran into bears, and they ran into these hostile Indians, and, gosh, it was really an interesting trip, wasn’t it?”

"I like to remind myself that my personal heroes, probably, like all of us, have imperfections that need to be looked at and understood."

Do you think that taking some of these mythologized ‘cardboard cutouts,’ whether they are heroes or ordinary people, and figuring out their humanity, who they really were, is helpful?

Absolutely. No question about it. Whether or not I’ve done a good job in terms of raising questions and offering possible ideas about that in the book, I don’t know. I’ll leave that for others to judge. But the challenge for us as a society is to try to understand what has happened over the course of the last two centuries, and I think in my last two chapters, you’ll see that I actually bring some questions together.

For me, the trip reinforced how important it is for society to figure out how to marry our disparate parts and elements and history in a way that both preserves the integrity of the different peoples that make up America and at the same time unify them. And that’s the challenge and it will continue to be our challenge.

It sounds like education plays an important role here.

We need to educate ourselves as much as possible. About the myths, about the preconceptions, about the assumptions that we’re making regarding who we are as Americans and what this country stands for and what it means. We can’t do that without understanding slavery, for example, and its impact over time.

The Black Lives Matter movement was really going on the summer I was traveling and continues. I thought, “You do not get to make a comment about how black people are treated today without having a thorough understanding of our history as a country and why people might have certain fears and certain concerns.” And it’s not enough to say, “Oh that’s in the past, we’re a society of equal rights and justice now.” Because we know that that’s wrong. And if you believe that it’s important to get clear on that then it leads you to the obligation to start studying a little bit more deeply and more thoroughly. 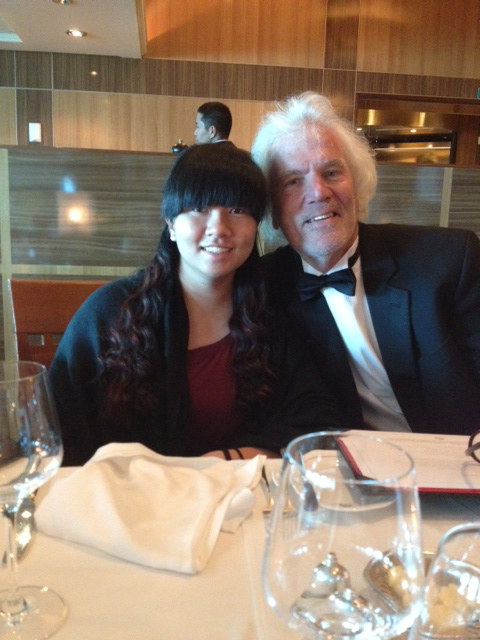 Critchlow with his daughter, Charlotte, having a formal dinner on the Queen Elizabeth 2 during a transatlantic crossing

Do lawyers have an obligation to put their privilege to good use?

Because of our special position in society and the fact that we have opportunities to do things by virtue of our licenses that other people can’t do, we have an affirmative obligation to reach out and help people who are in need of help.

One of the themes in my book is about privilege. I distinguish my life, which is a privileged life, a white kid from a lawyer’s family who went to a posh private prep school, from other people in the world.

So when I talk to people and argue about some of the value judgments we need to make as a society, what I try to point out is it’s important to know where you’re coming from when you make these judgements. Are you coming from a place of white privilege? And if so, you need to own that and acknowledge that and understand how that’s different from someone who comes from a very, very different place.

"[Lawyers] have an affirmative obligation to reach out and help people who are in need of help."

When you were Dean, how did these beliefs inform your leadership of Gonzaga Law?

The penultimate chapter is about the law school and a significant experience as Dean. I called the chapter, “What’s the Right Thing to Do?” With the permission of Professor Acharya, I wrote about the challenge, the hardship, and the obstacles he faced in becoming a tenured professor here as a Nepalese immigrant. The Promotion Review and Tenure Committee had recommended that he be terminated.

For me, I couldn’t be a dean, without an emphasis on how important it was to pay attention to our rhetorical commitments to mission. Which is a mission of diversity, a mission of reaching out, a mission of understanding our privilege and becoming more inclusive as an institution. Professor Acharya brings something that no one else can bring.

All the rest of us, for the most part, come from the same white privilege background. It’s really easy for us to sort of be liberal, in terms of our emphasis on inclusiveness and then impose standards on people that only white privileged people can satisfy. I reversed the committee’s decision and the President supported me. The next year, Professor Acharya got tenure.

But isn’t that part of abandoning the cardboard cutouts? Of examining, not just people, but institutions that you might hold dear?

Yes. And that’s why I tell that story. I thought, “This is dishonest of me not to.” If I’m going to talk about being the Dean, and how I transitioned from being a teacher to an administrator with some real responsibility, I can’t talk about it without really going into how hard that work is. And what it means to reflect on and become the kind of institution that we wanted to be. And I wanted to distinguish between the myth of who we are and the reality of who we are and how hard it can be to mesh the two.