In Honor of Mary Katherine Shaw

Before there was an online Gonzaga alumni directory, or a Gonzaga-in-Florence newsletter, there was Mary Katherine Shaw (’65).

Those who attended Gonzaga-in-Florence with Shaw in 1963-64 received an annual letter from her, complete with updated addresses and what was going on with their classmates. Of course, those who knew her weren’t at all surprised — Shaw was a very well-organized, bright, history major who kept a meticulous record of her time in Florence, writing regular letters home.

“She was amazing,” said Diane DeFelice (’65), who was a friend and one of Shaw’s three roommates in Florence.  “Mary Katherine stayed in close contact with everyone. She was the unofficial class historian, sending us a newsletter every Christmas. Even though she lived in Washington D.C., she traveled more than anyone — going through Chicago, she’d visit people there, then if she went to see family in Seattle, she’d visit people there. Oregon, California — every place she went, she’d call someone from our class.”

In addition to becoming a connecting thread between GIF classmates, Shaw was part of the Gonzaga Honors Program and went on to be a historian, linguist, librarian and scholar, working at the Library of Congress and becoming an unofficial authority on French and Vatican history. She was an exceptional student with a deep love of culture.

Shaw shared her experience in great detail with her widowed mother, who worked hard to piece together the money for Shaw to go to Florence.

“She could block out anything around her and focus, writing her letters,” recalled DeFelice. “I couldn’t figure out how Mary Katherine did it.”

DeFelice catalogued Shaw’s many letters, which chronicled the events of her trip in great detail, with beautiful penmanship. In them, Shaw recalled cooking a thanksgiving turkey (cut in half through the breast bone, then stuffed and laid flat to fit in the Firenze pizza ovens), and reactions to news of the assassination of President John F. Kennedy, which Shaw learned of while at a concert.

“In the concert, it was announced after the intermission and all were asked to stand for a minute of silence, which was done ‘per il Presidente Kennedy, chi fu ucciso oggi’ (for President Kennedy, who was killed today),” she wrote. “It was all so hard to believe.” 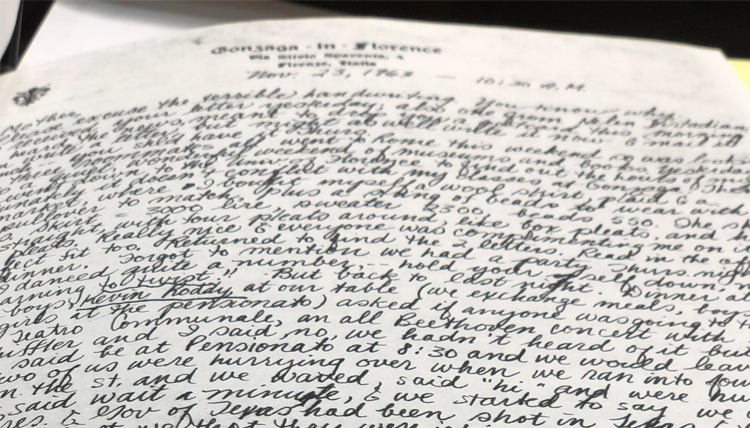 As she left Gonzaga, Shaw had a Danford and Woodrow Wilson scholarship that she put toward her master’s in library science, which she earned from Catholic University of America. Shaw relied on scholarships for her Gonzaga experience and greatly valued her time at Gonzaga-in-Florence, which is why her family established the Mary Katherine Shaw Memorial Florence Scholarship when she passed away suddenly in 2000. Today, Mary Katherine Shaw’s family and friends continue to give to the scholarship in the hopes that it will provide students like Mary Katherine, who have a passion for culture but limited means, with the opportunity to experience Florence and build lifelong friendships.

Samuel Nieslanik (’19) received the Mary Katherine Shaw Memorial Florence Scholarship and was able to spend Spring semester 2018 in Italy.  Nieslanik is a civil engineering major who came to Gonzaga from Meeker, Colorado, and is truly grateful for the opportunity to study abroad.

“I cannot express how thankful I am for the donors who have supported this scholarship,” said Nieslanik. “I hope that one day I can give back to the University just like you have, because that’s what it means to be a Zag—we are called to help those in need.”

Also receiving the scholarship this year was Ellen Schuster (’18), a business major who is also minoring in history and Italian studies. Originally from Kalispell, Montana, Schuster has followed in Shaw’s footsteps and has taken her passion for history to work in the library—the Foley Library here on campus. She expressed her gratitude for the scholarship that enabled her to study abroad in Florence and said, “It means the world to me to know that I have support from people who want to see me succeed. It is great to know people are passionate about the same things I am and support me on this journey.”

Supporting students’ growth intellectually, spiritually, culturally, physically, and emotionally is at the core of the University’s mission. It is also reflected in the purpose behind the Mary Katherine Shaw Memorial Florence Scholarship. Shaw herself embodied Gonzaga’s mission, seeking to engage with knowledge, wisdom and questions informed by classical and contemporary perspectives. Gonzaga University is truly grateful to see her legacy live on, perpetuating our shared mission.

You can join in supporting Gonzaga students' passion for global engagement with a gift to the Mary Katherine Shaw Memorial Florence Scholarship.