Finding God Amid Disease: The Story of Aloysius Gonzaga

Aloysius Gonzaga was born into a family of immense wealth and prestige. As the first-born son of his father, Ferrante, and his mother, Marta, he was in line to inherit his father’s title of Marquis. His parents did everything in their power to prepare their son for an illustrious future.

Growing up in the middle of the Italian Renaissance, Luigi, as he was known, witnessed the violence and brutality of the time. Two of his brothers were murdered, and he faced difficult life choices: continue living in the lap of luxury and nobility or veer off and find his own true path. Making difficult life choices wasn’t limited to 16th-century Italy. Today, our students wrestle with them all the time.

Aloysius wanted more than just a comfortable lifestyle and a fat allowance. While still in Spanish court in Madrid, he informed his parents that he wanted to join the newly founded religious order called the Society of Jesus. His father was furious and there followed a struggle of wills that continued even after their return to the family home in Castiglione. Stubborn Aloysius eventually prevailed, renouncing his right to the title of Marquis and to the wealth he was destined to inherit. He entered the Society of Jesus on Nov. 25, 1585.

Choosing a direction in life your parents don’t support wasn’t any easier then than it is today.

Not easy for the parents, and not for the child. Aloysius began his Jesuit life without the full support of his father, knowing that he was disappointing him. But he lived his vocation with the courage of his convictions and the strong belief that he was following God’s call. Whether we approve or not, knowing our child is moving forward with courage and belief in God is never a bad thing.

Aloysius began his studies as a young Jesuit in Rome, devoting his time to prayer and practices of austerity. But Rome was in the midst of a serious plague epidemic that left the poor and indigent dying in the streets. The young Jesuit regularly went through the city, doing whatever he could for the victims, including carrying them to hospitals where he would care for them, washing their wounds and feeding them. Not surprisingly, he contracted the disease himself. On June 21, 1591, at the age of 23, still six years away from his priestly ordination, he died.

St. Aloysius Gonzaga is a model for servant leadership. Without a lot of fanfare and expectation of recognition or fame, Aloysius quietly and humbly cared for the abandoned, vulnerable and dying. He was clearly devoted to and at the service of others. He willingly gave up all claims to wealth and power in order to follow a call that he was convinced came from God.

Finding God in a beautiful sunset or the warm smile of a loved one is fairly easy. To discover God in festering wounds and disease is much harder. St. Aloysius Gonzaga, despite his youth, has taught us to search out God in those who need our help and care. He has taught us to look beyond the external and into the heart and spirit of our fellow humans, where we will find God’s love is alive in everyone.


A JUBILEE timeline for the PATRON SAINT of YOUTH

1726 — Pope Benedict XIII canonized Aloysius Gonzaga, and three years later declared him the patron saint of youth and students, an honor later confirmed by Pope Pius XI in 1926. Today his remains rest in the church of the Gesu, next to those of his mentor, St. Robert Bellarmine.

1887 — Father Joseph Cataldo opened a school along the banks of the Spokane River and named it after his fellow Jesuit and fellow Italian, St. Aloysius Gonzaga.

Within our university campus is a parish church, St. Aloysius. A statue of the young Aloysius representing the saint carrying in his arms a victim of the plague. A few blocks north is St. Aloysius Catholic School and a couple of miles north sits Gonzaga Preparatory School, all named for the saint. Gonzaga University in Spokane is the only Jesuit university in the world named after St. Aloysius. 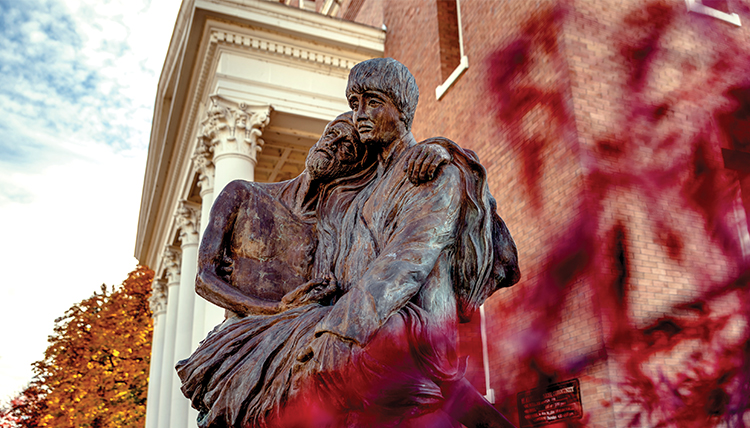