Connie Davis (’67) still sounds surprised at her big break. She entered the world of international public health — with the World Health Organization, no less — just days after completing her residency in Los Angeles. She was 28.

“It was a fluke,” she says. Perhaps. But Davis was improbably well-suited for the adventures she would face as a young doctor in India, joining the campaign to eradicate smallpox.

“I had gone to Gonzaga-in-Florence, and that was a really big year for me. It was pivotal. I wanted to live overseas and see the culture but I also really wanted to be a doctor. I had been given so much. I wanted to give back,” Davis said.

Smallpox was a scourge of the ancient and not-so-ancient world, as Ebola is today. It killed in days, pustules rising all over the body, especially on the face and extremities. Facial scars disfigured the lucky survivors. In 1968, the World Health Organization (WHO) set out to rid the world of smallpox. In May 1975, Davis completed her residency in pediatrics at the Los Angeles County-University of Southern California Medical Center. The WHO wanted her in Delhi in June.

Recommendations from her mentor at the Los Angeles County-USC Medical Center, Dr. Paul Wehrle, made this possible. He was a WHO consultant, and the organization was seeking doctors to send into remote regions, where India’s national government was not doing enough to stop smallpox.

The WHO “wanted young doctors they could put at the district level, give them a vehicle, a driver and a paramedic and money. You had the funds to hire people to vaccinate. You could get the work done,” Davis says.

Her first challenge came before she even packed her bags: The WHO wasn’t confident about sending a female physician into rural India, where there were no other solo women travelers, no services and no guarantee where she would sleep the next night.

According to Davis, the head of the eradication program in Geneva was asking, “Do you think she can do it?” and Dr. Wehrle replied, “Oh, yeah, she can do it.”

Davis spent a week training in Delhi. Nine men comprised the rest of the training group; all of them were going to Bangladesh, the next hot spot. Although this wasn’t clear before she arrived, Davis learned that India was down to single-digit reports of smallpox cases.

“I don’t want to stay here,” she remembers telling an eradication official. “I want to go to Bangladesh, where the smallpox is. I don’t want to go out and investigate rash-and-fever cases and have them turn out to be chickenpox.”

As a Muslim country, however, Bangladesh posed added challenges. The eradication teams would travel by riverboat to isolated villages. Davis would have to live on the boats with the men; bathing would amount to jumping in the water. She failed to win over the official.

The technique that Davis and thousands of other doctors in the eradication program used is called surveillance and containment — at heart, the same technique that health care workers in Africa use today with Ebola. Each team would begin their work by identifying a high-priority village or by starting in a town’s market.

“We would ask if anyone knew of any rash-and-fever cases,” Davis remembers. “If we heard a rumor, we’d chase it. We’d go to the village where we heard there might be a rash-and-fever case and find the person, then determine if it was smallpox. If we found someone, and it looked like the real thing, we would take off several scabs and send them off for confirmation to the specialized smallpox lab.”

But before results came back, Davis’ team had to start containment efforts, vaccinating every single person within a 1-kilometer radius and then search for rash-and-fever cases in villages within 10 kilometers. In effect, they created a disease-free ring around the patient, so that the virus had no new person to infect. 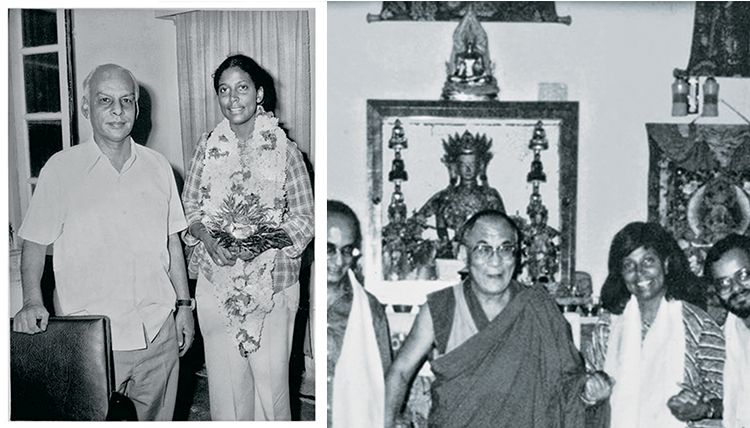 (Left) Davis, standing with a Rajasthan head minister. (Right) Davis and others with the Dalai Lama.

Davis wasn’t simply hunting smallpox, though. She was wreaking havoc with cultural taboos. While Davis, her driver and paramedic shared close quarters in their WHO Toyota Land Cruiser, they could not even eat in each other’s presence. The two men were of different castes and religions (Muslim and Hindu) and locals weren’t sure which caste Davis represented, so the three were to eat separately.

“Finally, I put my foot down,” shares Davis. “I said, ‘I am NOT going to eat all by myself every day for the next six months. I’m in charge of this team and you can both tell the authorities that I ordered you to do this. I have spoken to the gods, I accept all the bad karma, and I’ll take the blame.’”

Initially, it was pretty difficult for them — men who had never eaten with a woman unrelated to them. But it got easier and by the time the project was finished, Davis says the three were good friends.

Davis also dissuaded officials from a requirement that she check in at a police station daily, to ensure knowledge of her whereabouts. As an African-American woman traveling with two Indian men, Davis was widely observed by local people. “Everyone knew what I was doing and where I was. It was ridiculous,” she says.

Speaking truth to power was no problem for her, who along with her siblings had learned early from her parents “we were Davises and we were not to let people take advantage of us, or push us around.”

Davis thought she would spend six months in India, but she passed two years there, working in three regions. Her first posting was in the mountainous and remote Bengal, close to the Bangladesh border. While her team had been instructed not to cross international borders, she was determined not to allow smallpox to come back over the border into India. “Not on my watch,” she says.

One day, her team heard a rumor of rash-and-fever in a village near the border, but the source said the village was in Bangladesh. She looked across the border. How far was this village? Was it really smallpox? Borders don’t keep out diseases.

Should she go, or stay in-country? Davis cared more about cure than politics, so off they went, talking with local people and asking about the village. They found eight cases of smallpox. She lifted scabs off the youngest and last infected patient and had them flown out and tested to confirm the disease. In that mud hut, though, she was confident that she was seeing the real thing. She reported the outbreak by telegram to the WHO office in Calcutta and asked them to contact Bangladeshi authorities. Then she started containment procedures on the Indian side of the border.

In Davis’ two years tracking down rash-and-fever cases, that lonely village was the only place she found smallpox. The ancient scourge was declared eradicated from India in 1977. Global eradication of the disease was declared in 1980, after the last case occurred in Somalia. Smallpox eradication was a complex, enormous effort that is still considered a historic success in international public health.

No other major disease has been eliminated from mankind, though the WHO has for years struggled to eliminate polio. The only samples of the smallpox virus today remain in a U.S. lab near Washington, D.C.

Davis returned to California and began a more settled life as a pediatrician. A year later, she received a phone call from Dr. D.A. Henderson, the forceful physician who had led the global eradication program. He had become dean of the Johns Hopkins School of Public Health.

“Are you bored yet?” he asked. She laughed and said, “How did you know?” Henderson offered Davis a full scholarship for a master’s degree in public health at Johns Hopkins, and she accepted.

After earning her master’s, she went on to what was then called the Centers for Disease Control in Atlanta and continued her career in international healthcare overseas, “trying to improve the work of the national health staff of the various African or Asian governments, wherever you are, to do their own work.”

Over the years, she worked and lived in Africa and Asia. The diseases she confronted in Africa alone included malaria, childhood communicable diseases, TB, HIV/AIDS, meningococcal meningitis, yellow fever, cholera, Rift Valley hemorrhagic fever and highly pathogenic avian influenza, the most virulent of what is commonly called bird flu.

In 2014, USAID asked Davis to assist in responding to Ebola outbreaks and she declined. However, this year, she is excited to join a team consulting on malaria in Cambodia.“I guess it couldn’t be just a normal malaria consultancy,” she says. Her expertise is needed because the malaria in Cambodia is resistant to standard treatment.

Gonzaga University is developing its own undergraduate degree in public health, in response to a need for such expertise in the United States and internationally. Tentatively, the program will launch in 2016.

Public health, in essence, is the work of keeping a population healthy.

And the field is growing, says Brenda Stevenson Marshall, dean of Nursing and Human Physiology, whose school will collaborate with Gonzaga’s College of Arts and Sciences, School of Business Administration and School of Education.

Two tracks are envisioned: one in ethics and policy, the other using a social and behavioral approach.

Traditionally, public health education has been the purview of graduate schools; however, the number of undergraduate programs has risen in recent years. Gonzaga would become the fifth Jesuit college or university to offer a public health bachelor’s degree, joining Boston College, Fordham, St. Louis and Santa Clara.