Alumna Eileen Grimes ('06) is sharing lessons from her childhood experiences with new parents in her book “The Us Journal: A Journey of Love and Connection," releasing in November.

Standing out in a crowd can sometimes be hard, especially when that crowd is your own family. “Being one of the six [children] in the family, it’s hard to have time with your parents, hard to build that connection,” Eileen Grimes (’06) said. “I knew that when I became a parent, I wanted to do things differently.”

“The Us Journal” has already received some preliminary praise from Kickstarter’s “Projects We Love” and actress and philanthropist Kristen Bell, who supported the fundraising campaign.

Grimes’ first point of distribution was the Ronald McDonald House of Charities of the Inland Northwest, where she donated 100 copies of the journal to parents whose children are facing health care challenges. “Ronald McDonald House is such an amazing organization. To give families this tool to connect with each other, to bring at least some sort of light during what can be really rough, dark times is incredible,” Grimes said. 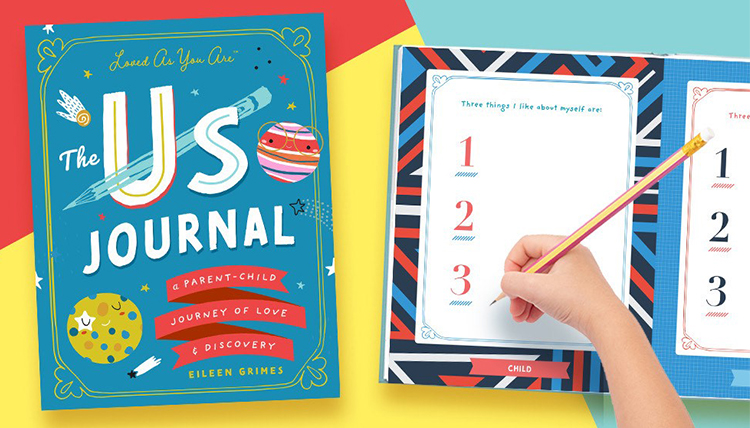 Grimes didn’t originally set out to make the journal for others.

“At first, it was a place where I could express how I wanted to connect with my kids based on my childhood experiences,” Grimes said. “I was at about 60 pages when I started working with a publisher and I realized we can really open this conversation up to include more voices, experiences, feelings and communication processes.”

Beside her own upbringing, inspiration for her project also came from her Jesuit education at Gonzaga. “Gonzaga was about being a part of something bigger than yourself. It was about providing your talents to the greater good. I sort of found that with the Journal, it's an expression of what I want to give back to the world,” Grimes said.

Beyond her college experience, Grimes’ own childhood experience aided her in crafting “The Us Journal.” With five other brothers and sisters, Grimes often felt like she had a lack of time alone with her parents. After going through her own trauma and childhood struggles, Grimes wanted to document her own journey with motherhood. Before creating the journal, Grimes ensured that her relationship with her children was founded on encouraging individual development and discovering self-identity.

Despite a hopeful impact for others, Grimes ultimately hopes for an empowering experience for her own kids. “I want my children to be the best versions of themselves, it's about letting them know that the person they’re growing into is enough,” said Grimes. “The Us Journal was really a way of letting my kids know early on that it's OK to be who you are, let's be excited about that and help you grow and not try to fill someone else's shoes.”

“I’m more excited about actually being able to spread more kindness, more connection, more love, because that's what I think is coming with each journal,” said Grimes. “I want people to view ‘The Us Journal’ as something that gets people to really see each other as we are. I really feel like I can connect a world that is really divided right now.”

Click here for more information on The Us Journal: A Parent-Child Journey of Love and Discovery.
Get Started
Share Story

Wealth and Justice at Gonzaga

Making The Most Of Life's Extraordinary Adventure