A Collaboration Worth Its Weight in Gold

When students decide to join a class in the School of Business Administration taught by Mirjeta Beqiri, she expects them to have plenty of fun, despite teaching a subject known for its lack thereof. “A math class is hard enough in itself, so you want to make it more fun and more meaningful,” Beqiri said. She makes that possible by connecting her students to work that makes a substantial impact on the Spokane community.


Last spring, one such opportunity supported non-profit Big Brothers Big Sisters (BBBS) and its donor database. BBBS’s mission is to create and support one-to-one mentoring relationships that ignite the power and promise of youth. They accomplish this by assigning a big brother or big sister to a child in need of guidance.


In fall 2020, Beqiri’s colleague Ta-Tao Chuang challenged his business intelligence class with analyzing and visualizing 10 years of historical demographic data from BBBS. According to CEO of the Inland Northwest branch of BBBS Kyle West, it was the first time that BBBS nationwide has conducted such an analysis.


For West, Gonzaga students’ efforts brought donor pool definition, data visualization, and identification of important trends and patterns in donations. Specifically, Beqiri’s class contextualized raw data previously unutilized after the organization switched customer relationship management (CRM) platforms. “We had all this data but we couldn’t tell a story with it,” West said. “[The students] started to detect these patterns and made us aware of what happened based on the data. It really helped us get an idea of where we’ve been and where we can go.” 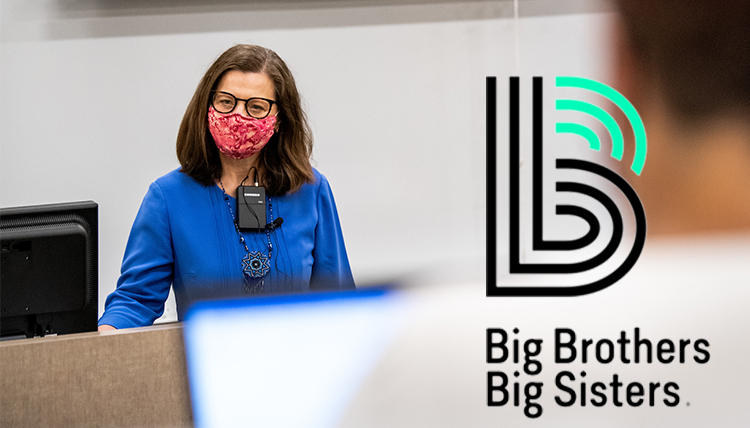 For Beqiri, the opportunity to work with a well-established organization like BBBS represented a chance for her students to apply the knowledge they learned in the classroom to real-world scenarios. Beyond simply applying what they learn, She sees students go above and beyond the task assigned to them when working for a cause they believe in. While providing a succinct analysis of the data is important, she encourages her students to go deeper and provide recommendations and suggestions to the organization.

“That’s why this work actually aligns very well with Gonzaga’s mission and the mission of the School of Business because not only is it experiential learning, but they are actually contributing to the community,” Beqiri said.

The work produced by both Beqiri’s and Chuang’s students has been substantially useful to West and the Inland Northwest sector of BBBS. From strategic planning and developmental goal formation to simply helping West with his presentations to board members, students produced meaningful and handy work for an organization that fosters healthy relationships in youth. “I draw from the analyses that they’ve done regularly,” West said. “I use those infographics they made still and we will use the same, or at least similar analyses to produce updated infographics. It has helped us to realize what we could produce internally in terms of performance dashboards using the CRM. There are literally five to eight, maybe even 10 ways that I currently use the outcomes of these projects and will use them for the foreseeable future.”

Its just the beginning of the relationship between Big Brothers Big Sisters and Gonzaga’s School of Business Administration. As long as BBBS has projects for her students, Beqiri will happily take them on. In fall 2021, the two organizations will deliver a core integration seminar course titled “Cultivating Change: Leadership in the 21st Century,” that will engage students as mentors with BBBS, spending part of their time in the classroom and part of it with their assigned children.


Whether it's for BBBS or a different organization, Beqiri and her students are focused on producing meaningful, applicable work.


“They are highly invested in making a difference,” Beqiri said. “I think that’s what makes a difference on those projects, their commitment.”

Explore other opportunities to serve the Spokane community in Gonzaga School of Business Administration.
Get Started

Big Brother Robert and Little Brother Ziggy met when Robert was 22 years old and Ziggy was 8. It’s been 50 years and they’re still connected today! And now at age 74, Robert has a new Little Brother he’s mentoring! This story is a great example of how intergenerational relationships through mentoring and volunteerism can make an impact on the community. (From the Big Brothers Big Sisters national organization)