What is Servant Leadership?

The School of Leadership Studies invited two of their newest Advisory Board members to answer the question: What is Servant Leadership? From the volleyball court to the Army National Guard, it sparked a deep reflection on collectivism, sacrifice and leadership.

A Lesson From the Court

A servant leader is a giver and not a taker. A person who responds to calls to lead out of the authentic desire to lift others up and to love. Possessing a natural inclination to help, to be last and not first is vital in this pursuit. I was naive and nervous those first days as an undergraduate at Gonzaga University. As a scholarship athlete, I learned my first lessons of servant leadership on the volleyball court. Our ability to be a strong and cohesive team relied on each of us giving of ourselves to reach the goals we had set. Sometimes we were not successful in our pursuit and our survival as a team was dependent on our ability to care for and love each other in order to persevere. One teammate's mistake was all of ours. We not only practiced to build our skill levels. We practiced giving grace, loving each other despite our flaws. I did not realize it then but the lessons I learned on the volleyball court would play a significant role in my development as a leader.

I must admit when I entered into leadership the responsibility for others threatened to consume me. The gravity of decision making was daunting at times. As a leader within a criminal justice agency I was very aware that this tension came from wanting to do the right things for the right reasons. Also, respecting the potential impact, positive and negative, that I could have on others. A weight derived from the authentic caring and concern required to serve responsibly and effectively. My experience as a Zag on the volleyball court grounded me in the concept of team, leveraging and sacrificing as a leader to seek common goals to achieve progress and success.

I was grateful to be surrounded by such phenomenal young women. A diverse team, we came from urban, rural and suburban backgrounds. We were different sizes, shapes and colors, each of us unique and eager to succeed. I am honored to still have many of these friendships over 30 years later. They serve as a touchstone, reminding me of where I have come from and have the potential to be.

As a leader I have gravitated to people who have selflessly committed themselves to others. People who have served courageously, persevering despite obstacles and risks. This has been vital in my journey toward servant leadership.

This challenging and rewarding journey is made richer when traveled with others. As a lifelong learner, I have relied on their wisdom and modeling which has taught me the importance of vulnerability, humility and accountability.

In those days as an undergraduate on and off the court I understood that I was a part of something bigger than myself. That I stood on the foundation of excellence and promise that was provided at Gonzaga University. As undergraduates, Zags, friends and teammates we supported each other while preparing to make the world a better place. I did not fully grasp then that this excellence and promise was derived from my relationship with and faith in Jesus Christ.

Today I am firmly rooted in the fact that He calls me to lead fearlessly and tirelessly, urging balance, discernment and discipline. Jesus calls me to further His kingdom on earth. He has modeled grace, love and mercy and commands me to extend this to others. I am honored and eternally grateful that the ultimate servant leader invites me to spread His love, light and life in a complex, polarized and weary world.

A Lesson From Soldiers 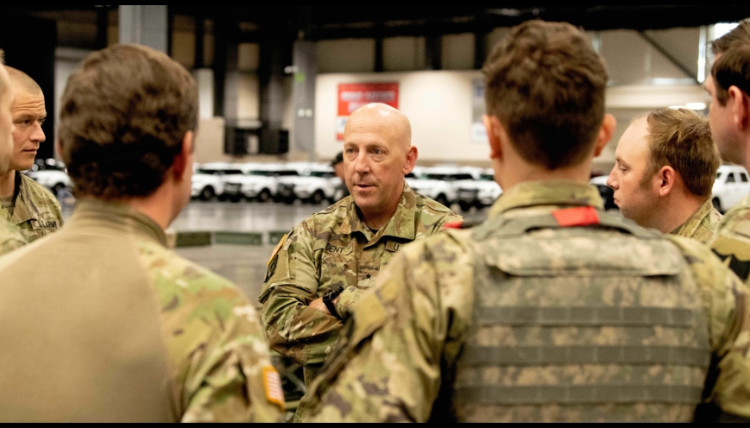 I had the tables flipped on me when I took command of the Washington Army National Guard in early 2020. Before taking charge of 6,000 Soldiers, I prepared the senior leaders in the organization to ingrain servant leadership into the foundation of our approach. To achieve this, we developed a new vision with new principles and strategies. However, our grand new plan was shelved by the growing complexities of what would become the Covid-19 Response. It was frustrating and challenging, but it allowed those I now mentor to teach me a powerful lesson – that servant leadership doesn’t start and end at the top.

The spring of 2020 found the men and women of the Washington Army National Guard executing a daunting array of missions in support of communities across Washington. Soldiers who had recently returned home from combat operations were now supporting food banks from Seattle to Spokane. At the request of elected officials, Guard units training for pending overseas deployments were now standing alongside their law enforcement partners to safeguard the rights of civilians. Members of the National Guard left their civilian jobs, family plans, and individual endeavors to put service to their state at the forefront. I saw this take shape in converted warehouses, community centers, Churches and downtown city blocks.

The old description of a Soldier’s toughness, tenacity, and perseverance were now complimented by a Guard Member’s empathy, resilience, humility, compassion, and understanding. It was my honor to see these tenets of servant leadership expressed firsthand from the extraordinary humans that make up this historic organization.

It was in these moments where I truly learned that the success of our collective mission, the lasting strength of our organization over the horizon, had little to do with a shiny new plan from the top.

Our genuine success has everything to do with empowering and igniting the potential in the hearts and minds of the brave individuals that serve in our ranks – just as they served their fellow citizens during a time of need. This is servant leadership.
The School of Leadership Studies offers degree and non-degree tracks for Servant Leadership
Learn More
Share Story

What is Servant Leadership?

Hope is an Extraordinary Story of You: Christine Hassing's Workshop

This General Continues to "Fail" Retirement