The Legacy of Pooky the Teddy Bear

Brian Kuhta (’86) fondly calls the teddy bear’s charcoal-black “scar” on his left backside a birthmark. Significantly smaller than it once was, the wound is a time capsule of Pooky the Teddy Bear’s adventures at Gonzaga University – one of which almost set the Bozarth Mansion ablaze.

Everyone knew who Pooky the Teddy Bear was. In fact, Pooky was better known at Gonzaga than his owner for many years, Kuhta joked. Kuhta’s long-distance girlfriend and current wife, Patty Carlson, gifted him Pooky before his freshman year. 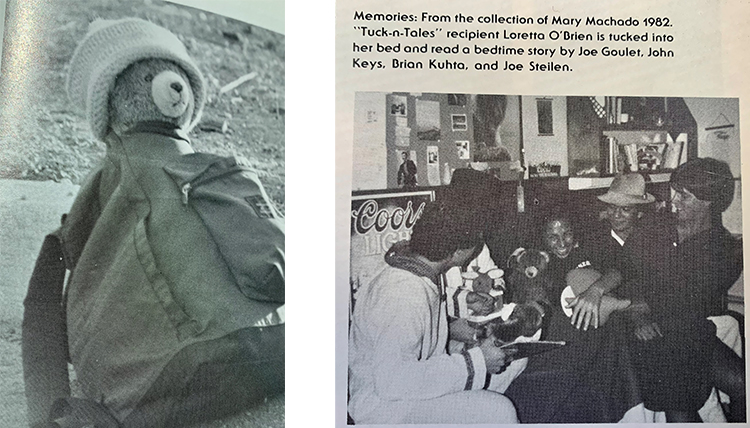 Pooky was “… a little embarrassing … there were not a lot of teddy bears in guys’ rooms in Catherine Monica in 1982,” Kuhta laughed.

But unlike some gifts, Pooky wasn’t an idle dorm decoration for long. Pooky accompanied Kuhta in service through the Tuck & Tails Fundraiser, a Campion Hall fundraiser where students, often paid for by their roommates, received a bedtime story. Then came the retreats.

“It was just on a whim I took him on Pilgrimage,” Kuhta said.

Kuhta recalls carefully nesting Pooky into his daypack to enjoy the view while the group trekked through North Idaho to the Cataldo Mission. Pooky’s fluffy head poked out of the backpack, adorned with his own personalized nametag. Pooky’s first Pilgrimage was even notable enough for KHQ-TV to cover him in a news story. 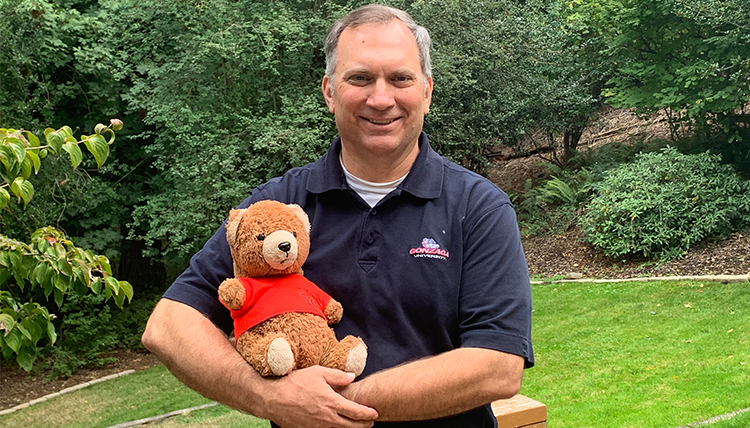 Kuhta, a self-professed “retreat junkie,” took Pooky on two Pilgrimages and at least four Search Retreats. Though mostly fun and games, at one of these Search Retreats students bear-knapped Pooky and hid him in a chandelier in Bozarth Mansion. One of the culprits noticed the smoke and quickly removed him before disaster struck.

Fortunately for both Bozarth and the bear, Pooky survived with minimal harm. He now sits on a bookshelf in a house full of stuffed animals, mostly owned by Kuhta’s 24-year-old daughter who’s studying to be a veterinarian. When Kuhta’s kids were younger, they asked about the burn and shared stories of their adventures.

Do you have a memory of Pooky or another fluffy friends who shared your college journey?
Email Us
Share Story