In 1881, Gonzaga University founder Father Joseph Cataldo, S.J., bought 320 acres of land perched on the north bank of the Spokane River. Situated just off the southwest corner was a small bay, which the Jesuits regarded as a spiritual spot for meditation and deeper understanding of the natural world. Later named Lake Arthur after Father Art Dussault, S.J., who led a beautification effort to clean up the lake in the 1960s, it has evolved many times over during its 140-year history. Now, it stands as a testament to the utility of nature and the resourcefulness of humanity. 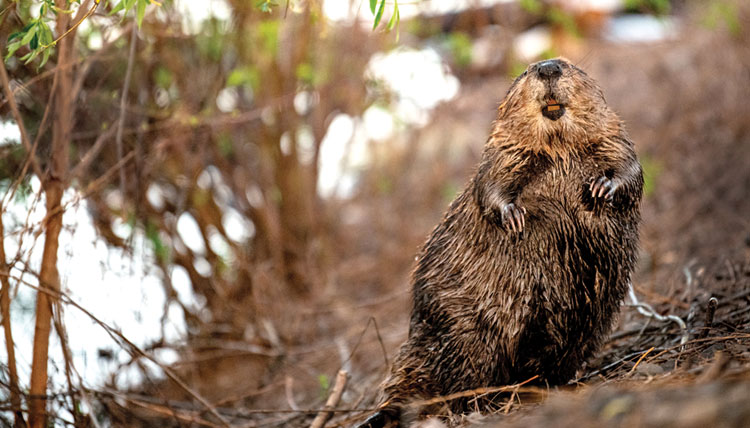 Gonzaga is an official “hotspot” on eBird, the largest citizencontrolled database for bird spotting in the world. Scientists, researchers and birdwatchers alike can use the database to track bird species populations and distribution. Jon Isacoff, professor of political science and environmental studies, has tracked 110 bird species at Lake Arthur (as of May 2020). Some of his rarer finds include a Pine Grosbeak and White-winged Crossbill. 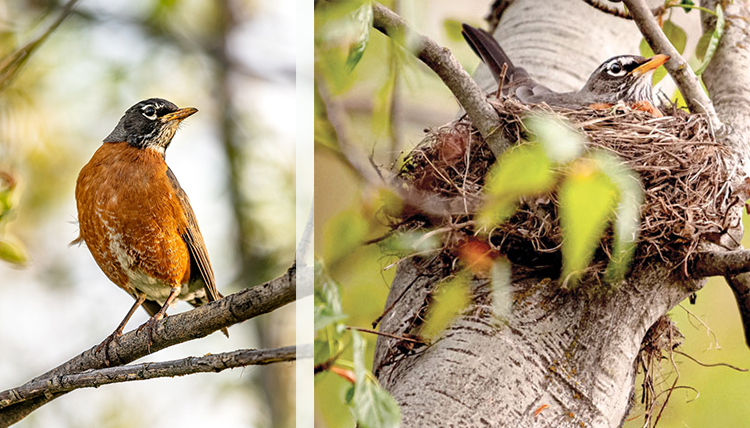 Human Ecology includes Lake Arthur in a “sustainability scavenger hunt.” Biology and environmental studies Professor Betsy Bancroft led the installation of water quality monitoring sensors to track nutrient data. She was also one of the faculty members who spearheaded the floating islands project to enhance the lake’s biodiversity.

From watching a bustling beaver lodge to studying urban rewilding, Greg Gordon, associate professor of environmental studies, uses Lake Arthur as a teaching tool for many of his classes, focused on the human-nature connection. Biology Professor Hugh Lefcort has published a history of the lake, and has studied snails and the impact of excess fertilizer and mining pollution on the water.

“One of my first research projects at Gonzaga involved sampling lady beetles on the willow trees around Lake Arthur,” says Gary Chang, associate professor of biology. “We collected a particular species to start a laboratory colony that became the main subject of an article. Having biodiversity associated with Lake Arthur has been a big help to my professional development.” 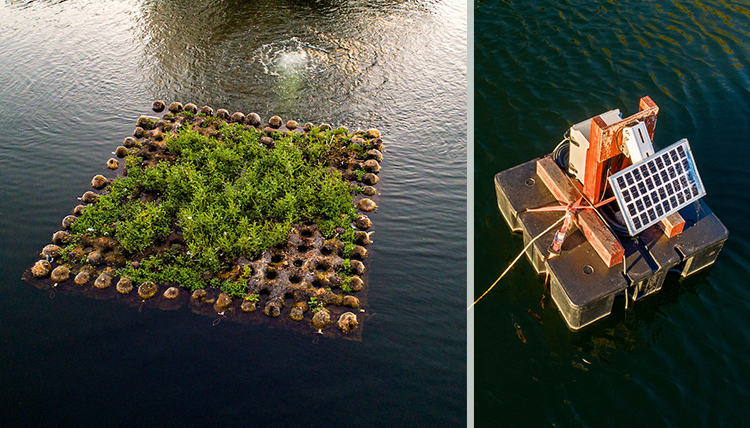 Right before the college opened in 1887, railroad tracks appeared along the south border of campus. The industrialization of the railroad industry began to degrade Lake Arthur and its surrounding habitat. The Jesuits decided to reorient campus to the north, as far away from the deteriorating body of water as possible.

In 1904, the Jesuits leased property to the McGoldrick lumber company. By 1906, five railroads traversed campus, one of which dumped saw logs into the bay for the lumber mill. The bay was filled with logs, and its health declined and was largely ignored on campus. 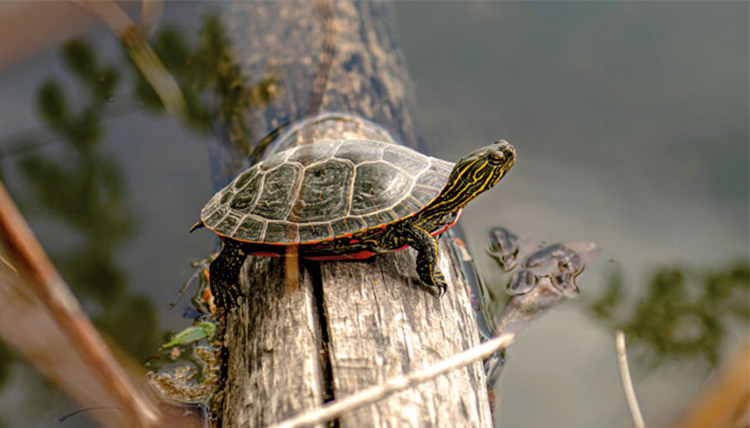 Natural conservation grew in cultural popularity and focus. After years of damage to the environment brought on by industrialization, many organizations, including Gonzaga University, took part in restoring the area’s natural beauty. Fr. Dussault began a 10-year campaign to beautify lower campus after a fire destroyed the lumber mill. Dussault raised money to turn Lake Arthur into a park with landscaping and a fountain. Lake Arthur transformed into an ecosystem that required constant upkeep.

In 2015, Gonzaga students created the Lake Arthur Revitalization Project to begin a long-term plan to restore the lake. They identified fertilizer from the soccer fields draining into the lake, heightening the lake’s nutrient levels. They also noted the bay’s natural ecosystem had been infiltrated by invasive species. In 2017, students assembled and placed floating vegetated islands on Lake Arthur to reduce levels of nutrient concentrations and serve as habitat for various animal species. Now called the “Lake Arthur Enhancement Project,” students work to improve the lake on an ongoing basis. 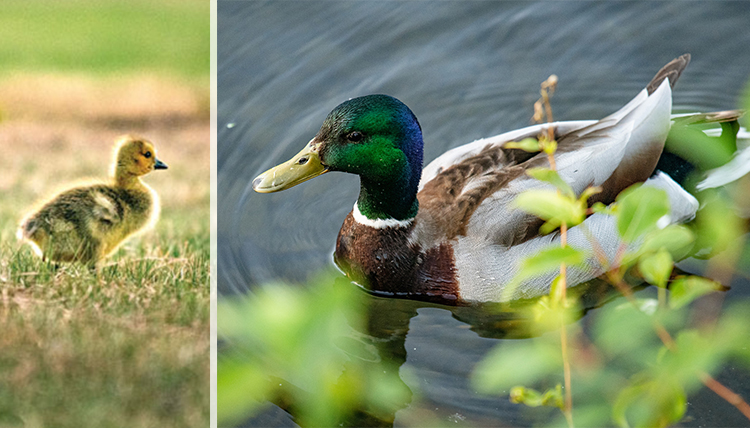 In the late spring and summer, students flood the area to study, chat or hammock. When temperatures lower, they watch early sunsets over the lake through Jepson’s expansive southern window off the Student Lounge. One December when the lake was frozen, a river otter popped out onto the ice and scampered around – an opportunity Chang took to let students watch out the window.

The environmental science community will tell you that if enough people understand a problem, its causes and the science behind it, they will accept the challenge. Sometimes it is easy to be frustrated by misinformation, political divides and apathy for the environment, but Lake Arthur serves as a guiding light to what can be.

It took time, dialogue and commitment from dedicated people to heighten the awareness. But now, when you walk down to the lake and listen, you hear their success in the birdcalls and buzzing of insects. Lake Arthur is a reminder of our potential. Education is the catalyst. 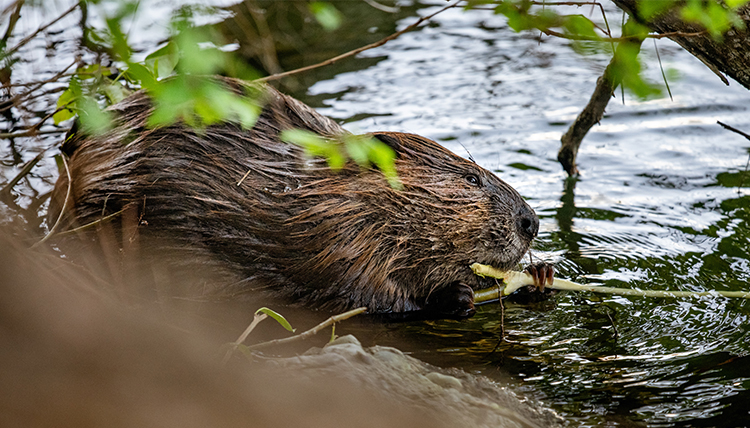 Did you know Lake Arthur is the only classified wetland on the Spokane River within city limits? It’s also an ebird hotspot; click here to see.

Support the next generation of life and study at Lake Arthur.
Give today