Cultural Narratives in Service to Our Students

Editor’s Note: This piece is adapted from a presentation Provost Deena González gave to IMPACT, a group of faculty and staff members who gather regularly for conversations on diversity and social justice, organized by the Office of Diversity, Equity and Inclusion. It has been edited for space.

What if a whole classroom – an entire University – devoted itself to the lives of those missing from the common version of U.S. history?

In my journey into higher education administration, one of my most interesting endeavors has been to promote an academic voice no longer rooted in the traditional colonial perspective; for example, to remove the methodologies and formats that portray the movement and progression of people westward, from the northeast as a founding site to the far west, a site of conquest and contestation. The narratives of Boston and of the 13 original colonies are gaining fresh interest today regarding what and whom they omit, as well as what those stories say about the people who created them. The discussion of monuments, both as symbolic of racial violence and as nods to the past, or as patriarchic symbols of oppression, have been guided presently by new research and knowledge.

A Berkeley Graduate Student in a Time of Change

In the 1960s and 1970s, global counter-colonial movements echoed from the Czech Spring Paris revolts, Cuban Revolution and the Central American resistance movements, to the U.S. where we encountered the Chicano/a movement, AIM, the Black Panthers, the African American Civil Rights formations. Anyone in graduate school then, as I was from 1974 to 1984, could not live in a bubble. While at Berkeley, you could hang out at local bookstores and see a Nobel or Pulitzer prize winner, and we hovered around them like kids at the ice cream store.

I remember seeing James Baldwin on the Berkeley campus; Angela Davis was a regular; César Chávez and Dolores Huerta frequented campus in 1974 and 1975. Russell Means and Dennis Banks had not yet been arrested for Wounded Knee, but they were camped out at DQ University (whose name is not rendered in respect to the two spirits/gods after whom it is named, and founded by and for Native Americans) just outside of Davis, an old military facility AIM had taken over. Some of us would go there and teach courses; in my case, the first Chicano history class I ever taught.

Looking back on those formative moments, 45 years later, I recall how much we believed we could change the world. We had seen it in all those movements, from Mexico City to eastern Europe. We saw the rise of a feminist tide that would not be held back and an LGBT movement (no Q or I yet) that forced the country to think about its national narrative. To my mind, social justice was fundamental to the notion that U.S. society practiced social change.

It was in Berkeley’s history department of 70 men and three women faculty, teaching working-class, wealthy and uppermiddle class grad students, that I began to realize that whether I saw myself as different, as other, as non-white, mattered very little because the majority saw me that way. One African American, one Latina and one Asian American made up the world of underrepresentation in the department, and we were reminded of this daily.

Winthrop Jordan, of Pulitzer fame for his book on African Americans (really about white slaveholders), “White over Black,” asked me “How long has your family been in this country?” As a 14th-generation New Mexican, I answered: “On my father’s side, since 1598, and on my mom’s, well perhaps 25,000 years, depending on what the anthropologists eventually decide.”

This experience – more than any other – shaped my world view from age 21 onward.

As more white historians, mostly men, told me I could not find anything in the archives about Mexican-origin or Native women, the more determined I became. My adviser, of German heritage, poured over my essays, asking the right theoretical questions that assisted analytical, interpretive history. We could not have been more different, and I learned so much from his mentorship. I had seen examples of New Mexican Hispanas writing novels, cookbooks and short stories in the 1920s. I had heard of women warriors, the Apache warrior Lozan who distinguished herself as her brother did; of Catalina de Erauso, the lieutenant nun, a Basque who passed as a man and fought in the territories of South America.

I began to dig for more, and that’s how we created the field of Chicana Studies, how we ensured that there was no such thing as invisibility, silence, or deficiency models guiding the stories that did see the light of day. 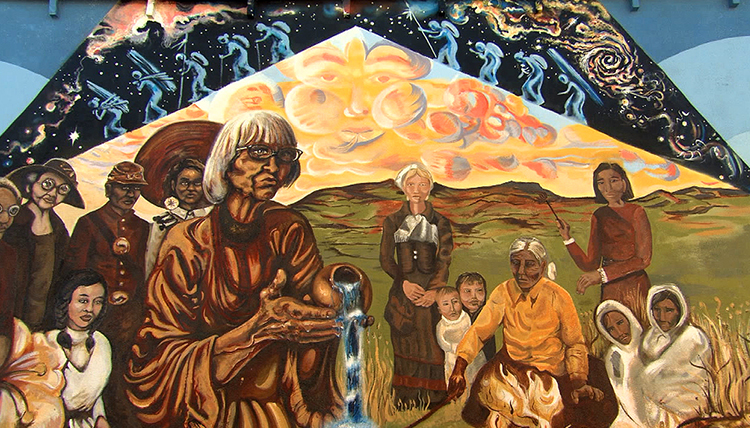 Training across the racial divide that marked my graduate education became key to the type of historian I wished to be.

I published my findings with the best presses in the land for a reason: They needed to know that we were indeed there and that the narratives were rich in art and ingenuity, in sensuality and in leadership. My memoirs are available on video and in print at the Sophia Smith Collection at Radcliffe/Harvard as part of an oral history project on living women historians. The Bancroft Library is documenting my research to preserve the way Chicana/o Studies was founded. Access to these publishing firms was the product of allies and of networking made possible with a tenure-track position, and resources available by donors and friends of Pomona College and Loyola Marymount next.

My vitae today asserts that I am the first Chicana to receive a Ph.D. in history from UC Berkeley, first to teach a seminar on Latina Feminist Traditions, co-editor of the first major Encyclopedia of Latino/as in the U.S., and author of the first book based solely on Mexican-origin women of the 19th century. This has nothing to do with bragging. It also is not to remind students today of “how far we have come.” The more powerful message is “look at what one can achieve” with resources and friends. Had Peggy Pascoe (University of Oregon) not intervened with Sheldon Meyer at Oxford University Press, much of my work would not have been published. The idea of facilitating an allied network is what moves me to come to work every day.

Putting it in Perspective at Gonzaga

The world is a gargantuan place and we are here for such a short time. We worry too much about money and status, skin color and appearance, and so much less about expanding our minds, figuring out how to learn very complicated topics and translate them into manageable, useful bits of action. At Gonzaga, a Catholic Intellectual Tradition asks us to examine, assess and re-assemble. We must name and explore how to make a difference and do the needed reparation through this discernment.

I believe much of this work begins with preparing our graduates to understand the missing parts of our history in order to help lead change. It asks us to flip things out and over, to work through a perspective we might not otherwise enlist. We used to call this practice, in history, “reading against the grain.” It means developing a self-awareness about one’s position or advantage (standpoint), as well as about what is invisible. Critical thinking is the result; not seeing the world in absolutes, but in colors and in disarray. Sor Juana Ines de la Cruz, the Americas’ Tenth Muse and Mexican, put it this way: “I do not study to learn more, but rather to ignore less.”

In less than 25 years, this country will be majority non-white and over half of public school students will be Latinx. How will Gonzaga prepare its graduates for such a world? How can we develop our students to be the teachers, lawyers, doctors, judges, business owners, dancers and orchestra leaders who become the changemakers, or those who empower others?

It begins with speaking our contemporary truths to power. Then we support those who can begin making a difference now, in subject matter and research, in new curricular design, in partnerships that stretch so far outside of anything we have seen that the only thing getting in the way is not having enough bodies to populate the new learning spaces. And then we embolden our faculty and students to help create solutions for some of our most challenging realities: to sustain living wages, develop better biodiversity and ecologies, and foster racial/ethnic/gendered harmonies and convergence.

Our Ignatian influences – as well as the other saints, gods, goddesses, and spirits of several religious traditions – move us toward one another rather than away from a collective wisdom generated by knowing who we are and what we are meant to be. Our knowledge base built on the work of African American intellectual traditions, of historical and cultural customs, benefits our larger ambition or goal of becoming people for and with others.

This is what will help us shape a humanism that does justice and ensures no group remains invisible or silent.

See how Gonzaga continues to reshape and reevaluate its response to racial injustice, and live its promise to a more equitable future.
Keep Reading
Share Story

University Statement on the Death of George Floyd

BLM: A Dream Can Become Reality at GU