Veterans Rescued by Hope with a Cold Nose

Christine Hassing (’18 MOL) was walking a journey with a friend who was dying of cancer. In the friend’s last few weeks on Earth, Hassing began converting her words into letters her friend’s two young sons would read in the years ahead.

“During the last conversation with my dear friend, I made a vow to her that I would make her story matter. I didn’t know how at the time,” Hassing says.

Then, Hassing received a class assignment in her Master of Organizational Leadership immersion for Imagine, Create, Lead, directing her to do something creative she had not done before. Writing life stories was not new to her; writing a story for someone not knowingly dying was.

“When I asked my classmate Jacob, a U.S. Navy veteran in class with his support dog Tracer, if I could write his story, it was a few weeks after my dear friend had died. I thought I was asking for a class assignment. My soul knew I was asking to fulfill a larger purpose,” she recalls.

Three years later she has co-authored a book about the depths of pain, trauma, sorrow and despair, and equally about the power of courage, will and hope, with 22 remarkable veterans as she tells their stories of hope resulting from the camaraderie with, and support of their service animals. Her book is “Hope Has a Cold Nose,” to be released on Veterans Day 2020.

Hassing recounts how service dogs help people with Post-Traumatic Stress Disorder in countless ways. From sensing a nightmare and waking a veteran before terror takes hold, to placing a comforting paw on someone’s shoulder to ward off a panic attack, these dogs play a key role in helping those who’ve lived through trauma reintegrate into society.

The book includes the stories of 22 veterans and a first responder, who reminds us PTSD does not discriminate. Each day in this country 22 military vets take their own lives. Annually, 7,300 vets commit suicide, contrasting to 548 service women and men lost in combat.

PTSD is the common denominator in these stories. The role service dogs play in each vet’s recovery is the blessing. 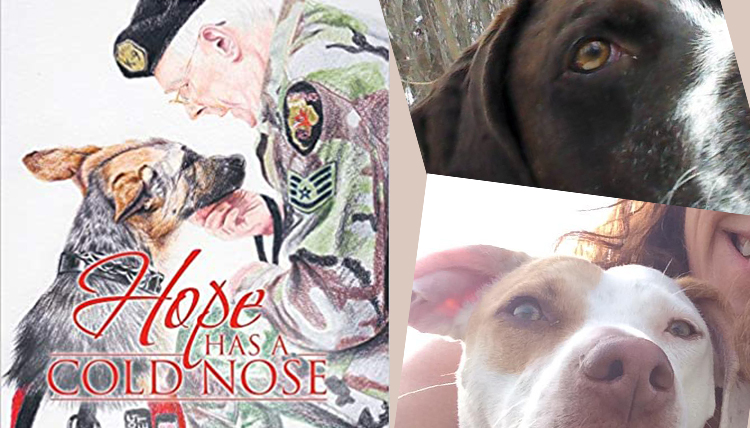 Following Tom’s return to civilian life, prescription medications were the coping mechanism. So was reclusiveness; leaving home was a major ordeal. Then came Ryder. And an 11-week road trip!

In another story, a Vietnam serviceman teamed with a dog (King) on missions to find explosive devises, and when the vet returned home, he was not able to bring King with him. That created a hole in his heart for nearly 30 years. Then, he got a service dog. “He talked about how King saved his life more than once, and how his new service dog is saving his life in a new way,” Hassing says.

Another story recounts a veteran who went for a walk one day with no intention of returning. “He remembered his service dog licking his face, helping him set the gun down, and he has never looked back at hopelessness again,” Hassing says.

“Telling their stories was an incredible honor and a very sacred journey because each one of these veterans gave me their trust to give their stories the honor and dignity they deserve, and I am not a veteran. I think because I believe so deeply in hope, I feel called to try to offer hope to those who feel the most hopelessness. It was an incredible privilege to be a voice for people who found healing in their journeys, and I was honored to be the bridge with my 23 co-authors,” Hassing says.

This is her second book, the first one “To the Moon and Back to Me: What I Learned from Four Running Feet.” She resides in southwest Michigan where her loudest neighbors are the bull frogs and blue herons, alongside her husband and their four-legged souls, each with a cold nose. After 26 years in the pharmaceutical industry, she now serves as a consultant, mentoring teams and individuals in respect to leadership development.