The Center for Civil and Human Rights selected 3L Rebecca Smith and 2L Bailey Pahang as the 2019 $5,000 summer grant recipients. Both Pahang and Smith are Thomas More Scholars and spent their summers advocating for marginalized communities and individuals. Recipients of this grant must commit to doing summer internships involving legal work important to the Center for Civil and Human Rights and its mission, and qualifying positions must be located at least 150 driving miles outside the Spokane area, and must be for at least 10 weeks or 350 hours.

Smith worked at the Housing Preservation Unit at Bay Area Legal Aid while Pahang spent her summer at the ACLU-WA in their Policy Advocacy Group.

Smith and Pahang shared more about their summer grant experiences:

I spent the summer working as a Law Clerk in the Housing Preservation Unit at Bay Area Legal Aid. In this position, I worked with low-income tenants in Contra Costa County to defend against eviction, preserve housing vouchers, draft fair housing complaints, write motions, and make reasonable accommodation requests. I conducted research on legal strategies for housing discrimination claims and procedural protections, as well as the disproportionate consequences of eviction for people of color. I’ve also engaged in community work, including investigation for potential impact litigation cases.

Eviction cases move quickly: we often have just a few days to file a response presenting challenges to comprehensive fact-gathering. I worked with a client who could not afford rent after losing her housing voucher. She had few defenses against her eviction and no money to pay past-owed rent. Like many living in poverty, one emergency was all it took for this family to face homelessness. As I was reviewing her lease, I noticed an addendum requiring a 30-day notice for termination of tenancy, even though California law allows the unlawful detainer to be initiated after 3 days. We filed a motion for summary judgment due to improper notice, and the case was dismissed. Although this was a favorable outcome for our client, it was difficult to shake the underlying unfairness that caused this situation: the affordable housing crisis; which has facilitated enormous profits for large corporations and property owners, at the expense of the community.

In addition to fast-paced unlawful detainer work, I worked with clients suffering from the consequences of an eviction record. I wrote a motion to seal the eviction record for a woman who had a default entered against her after escaping domestic violence. Her abuser and co-defendant was unwilling to cooperate when she tried to remove her name from the lease; as a result, she ended up with an eviction record when he was evicted. She had received no notice and had no opportunity to defend against it—she only found out about it after being denied housing. Motions to seal implicate the First Amendment’s protection of the public’s access to court records. The motion required a multi-part balancing test to persuade the court that sealing is justified. The public interest in information related to an unlawful detainer record where the defendant bears no responsibility and is the result of domestic violence, seems practically nonexistent. Unfortunately, these resource-intensive motions are still often denied, especially without legal assistance.

In the United States, a person charged with a crime is entitled to legal counsel. Working in civil legal aid, particularly in housing and eviction defense, it is difficult to reconcile why the same right does not apply in serious civil matters. The stakes are just as high in many civil cases, including the security of housing, child custody, deportation, or the loss of healthcare. Homelessness, family separation, and lack of access to healthcare can lead to trauma, illness, and death.

Many of my clients suffered terribly after losing their homes, being attacked on the street or robbed at shelters. Those with disabilities and substance abuse issues find it impossible to manage their health in such circumstances. These challenges are connected to the criminal justice system which, like eviction, disproportionately impacts poor communities and people of color. The cases I worked on this summer have illuminated the importance of civil legal aid for poor and vulnerable communities, and the creative possibilities of using the law to correct injustices. I have also developed a staunch belief and interest in the need for collaboration between criminal justice work and civil legal aid.

This summer I learned so much from brilliant lawyers deeply dedicated to increasing access to justice. They guided and encouraged me as I develop my advocacy skills and client-centered practices. Despite the overwhelming challenges and perpetually insufficient resources, my supervisors and clients inspired and affirmed my commitment to civil legal aid. I am grateful and honored for this opportunity, provided to me by Bay Area Legal Aid and The Center for Civil and Human Rights.

Despite the overwhelming challenges and perpetually insufficient resources, my supervisors and clients inspired and affirmed my commitment to civil legal aid.

This summer, I had the opportunity to work for the American Civil Liberties Union of Washington (ACLU-WA). As a Policy Advocacy Group Intern, I advocated for the civil rights of individuals from marginalized communities through legislative reform and public education.

As a former middle school teacher, I went into the summer with a narrow lens, excited to learn more about education policy. The ACLU-WA opened my eyes to the intersectionality between all civil rights, such as education and health care. I researched, wrote about, and presented on the racial disparities in health care nationwide, and in Washington state, specifically. These inequities ultimately exacerbate the misconception that health care is a privilege. This is without a doubt interrelated with inequities within the education system, as the ability to access the health care system increases with access to education.

The ACLU-WA opened my eyes to the intersectionality between all civil rights, such as education and health care.


I also wrote a legal memorandum and presented on model laws and policies for pregnant and parenting teens. Pregnancy is the leading cause of students dropping out of school. This is not due to a lack of motivation or potential, but rather a combination of discrimination and a lack of resources. My goal was to do the groundwork to shift the narrative and systems of support for pregnant and parenting students in Washington.

Furthermore, I was honored to be at the Washington State Capitol for the signing of the Keep Washington Working Act, a major milestone in protecting the rights of immigrants. To ensure effective implementation of this act, I created public education materials and partnered with statewide advocates to build relationships with and between those from our immigrant and indigenous communities. As someone who identifies as both Latina and Native American, I was in a unique position to partner with our Immigration and Police Practices Counsel to elevate the strong alignment between the immigrant rights movement and the ongoing fight for the rights of indigenous peoples. I played a role in building partnerships across our communities that continue to be marginalized by federal government enforcement and aggression and represented the ACLU-WA at several coalition meetings.

In addition, I was able to attend court on several occasions and witnessed a show cause hearing, where the judge held that the Seattle Police Department (SPD) had not yet met the accountability factor to prove that excessive use of force was no longer an issue. As someone with family who has directly been impacted by police brutality, this was a historic moment to be a part of, as it was the first step to hold SPD accountable for equitable practices. I also attended a hearing, where the ACLU-WA settled a lawsuit with the Whatcom County Jail for denying individuals in their facility their medication-assisted treatment (MAT). In response, I drafted advocacy letters informing jails in Washington of their legal duty to provide MAT to individuals in their care, as substance-use disorders are considered a disability under the Americans With Disabilities Act. I also drafted legislation in hopes of approaching substance-use disorders as a public health concern, rather than a criminal justice one.

Throughout my first year of law school, I really struggled with imposter syndrome. As a woman of color without any concept of what it meant to be an attorney, I found it difficult to navigate my role in the legal system and how an inexperienced young woman from Federal Way could possibly begin to tackle systems change. During my time at the ACLU-WA, I was asked to collaborate with our Policy Director to write an amicus brief on civil asset forfeiture. In a matter of days, I went from having no clue what civil asset forfeiture even was to laying the groundwork for high impact litigation. I will never forget when my supervisor informed me that he decided to place my name on the brief after reading what I had written—to have someone I deeply respected have such a strong belief in me planted a seed that maybe I do have a place in this legal system after all. I will hold onto my summer at the ACLU-WA for the rest of my life and sincerely hope that I will find my way back there one day soon. 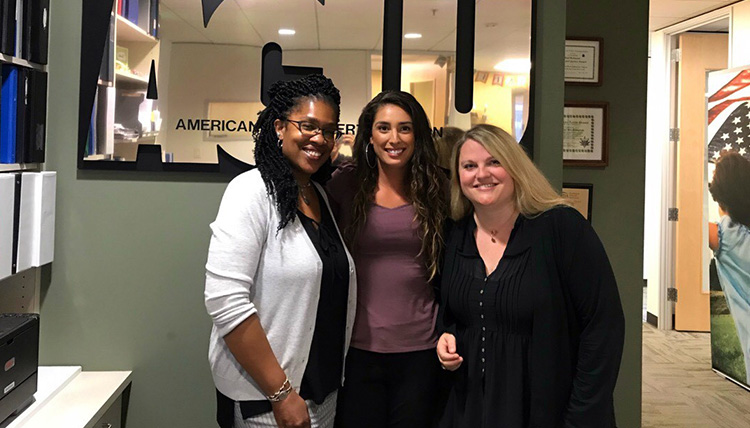