What do you do when you have an ear for other languages and a desire to promote global goodwill?

One option might be to seek out a unique opportunity to study a language you have to really want to learn, because you have to work pretty hard to find someone to teach you.

That’s the path Aizley Hansen (’18) followed, anyway. “I love to torture myself,” she says. “I always look for the most difficult opportunity possible.”

After spending most of the summer before her senior year of high school focusing on youth leadership, children’s rights, and gender equality in the Dominican Republic, Hansen knew she ultimately wanted to work abroad in a development role, a sharp deviation from her original plan to study chemical engineering.

By the time she reached her junior year at Gonzaga, she also knew she would have to learn another language in order to communicate in a meaningful way with the people in the communities where she would be working. After zeroing in on Rwanda and South Africa, she decided to learn Swahili. She found a program through the University of Minnesota, and she knew where she was headed.

But then she went to an informational session with a Boren advisor from D.C. “I ended up staying and talking to her about their African Flagship Languages Initiative (AFLI) program [in Tanzania], which started because there was a need for African language in the security sector. So I decided to apply to that program, too—as a fall back.”

Hansen had already applied to Boren in Turkey as a sophomore. “That was a little misguided,” she says. “I thought, well, they’ll choose me if I want to go somewhere in the Middle East because I thought national security meant terrorism. I thought they would like it if I applied there, so I convinced myself that was where I really wanted to go, needed to go—was called to go.”

Very much in line with Gonzaga’s mission, Boren Scholarships strive to build intercultural competence in a broader cross-section of U.S. citizens, particularly in regions critical to the security and stability of our nation and in regions underrepresented in study abroad. This National Security Education Program initiative broadens the definition of national security to encompass other areas that impact quality of life, such as sustainable development, global hunger, and migration issues—areas of particular interest to Hansen.

“The [application] essays I wrote were focused on development as international security, specifically educating women and children and how educated women lift up communities—the role women and girls can play in strengthening communities and lifting them out of poverty if they’re given the opportunity to achieve an education. This not only raises the median income of communities, but if families are given opportunity, young men and women are less likely to seek out opportunities like terrorism,” she says. “I was actually shocked when I got to [the AFLI intensive Swahili program in] Florida and talked to some of the other students. Most of them had written about Chinese-African economics and Chinese intervention in East Africa, but only a few of us wrote about development issues.” 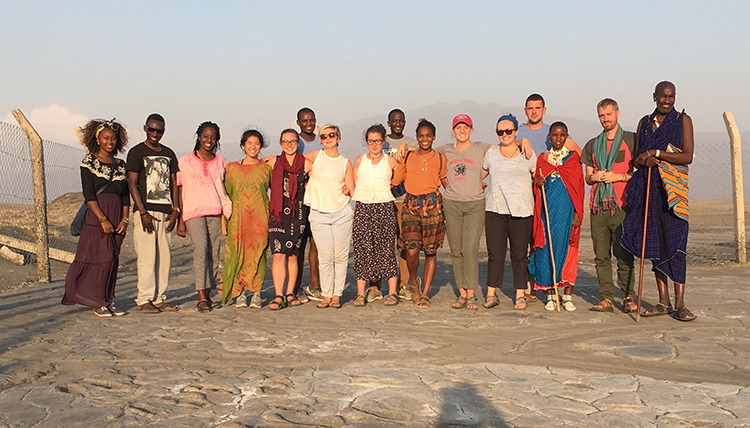 Once in Tanzania, the group of 13 found themselves in total immersion, both culturally and linguistically. The students lived with host families and went to class five days a week, focusing on grammar and conversation three days a week and literature and social and political culture the other two. Hansen’s host mother was committed to her language acquisition, and it was only after a few weeks of living under the same roof that Hansen realized she spoke fluent English.

“About two weeks after I moved in with her, I was having a conversation about a conference with my professor and we ended up talking for about an hour and a half about my improvement and the news and our days, and I didn’t even realize I could do that,” she says.

Eight months later as she contemplates the experience, she has new revelations every day. As she prepares to leave for Spain to teach Model UN to high school students as part of the Fulbright ETA program, she reflects that, “Right now, I think the idea at the forefront of my mind is sharing my experience effectively with my students. All too often, an exclusive, misinformed narrative of ‘Africa’ is shared.

“In reality, Africa is a beautifully diverse continent, home to over a billion people from thousands of cultural and historical backgrounds. As someone who was fortunate enough to spend time immersed in Tanzanian culture, I have a responsibility to share my experience in a thoughtful way, breaking down harmful narratives of poverty and the noble savage.”

Bringing the World to GU