A Soaring Spirit Encouraging Others To Spread Their Wings 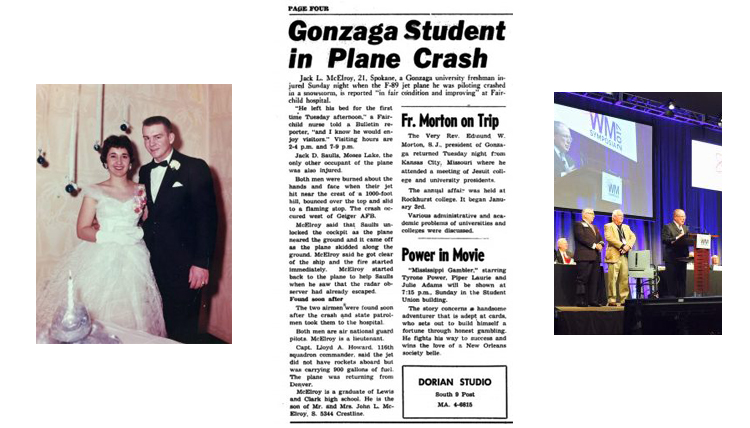 Four years earlier, McElroy (pictured above, center) had graduated from Lewis and Clark High School in Spokane, Washington, where his family moved in 1942 from Grand Coulee, Washington. Intense science and math studies helped land him a job as an engineering technician with General Electric at the Hanford Site in Richland, Washington. In 1957, he left for United States Air Force Aviation Cadet training. In 1958, he graduated as a commissioned officer and fighter pilot, and shortly thereafter, began flying with the Air National Guard while studying at Gonzaga.

“I was the first in my family to go to college,” McElroy said. He was an engineering student during the day and a pilot at night and on the weekends in the early days of the Cold War. He saw his first winter break as an ideal time to complete some of his flying proficiency requirements for The Guard.

“One of the requirements was cross-country flying,” explained McElroy. “It was to practice navigation and landing at other airfields.” With radar observer Jack Saulls, McElroy had plans to fly to Denver, Colorado, but the weather was not working in their favor. “The fog at Geiger Field in Spokane was as thick as pea soup, delaying our departure by many hours,” he remembers.

Their flight posed many challenges. In addition to the weather being anything but optimal, the fuel system malfunctioned and auxiliary tanks had to be jettisoned before the plane could safely land in Denver. The pair of Jacks took to the skies again, having to stop and refuel in Boise, Idaho before continuing on to Spokane. McElroy was due back in class at GU the following morning.

“The flight went quickly,” he said. “It was about 8:45 p.m. when the Seattle Air Traffic Control Center turned us over to Spokane Approach Control.” Due to winds coming in from the north, Spokane Approach Control directed them to a runway that would not allow them to use precision radar approach or the instrument landing system that the reverse runway offered. Without a radar-controlled approach, communication had to be transferred to Geiger Field Tower.

Snow filled their view. Farm lights were visible off to the right. They were too low. Once the plane hit the ground, McElroy instinctively reached for the canopy jettison handle, but before he could grab it, the canopy blew off. When Saulls ejected the canopy from the rear seat, the corner of the canopy caught McElroy’s helmet, tearing it, along with his oxygen mask from his head. When the plane finally came to a stop, he unbuckled and leapt from the wreckage trying to escape the flames. He called out for Saulls, who was still in the rear cockpit, unable to use his hands. Their plane was in pieces on the hillside and everything was on fire.

Once McElroy was able to free Saulls from the cockpit, the two men ran down the hill away from the burning plane.  A farmer had heard the crash and called for the State Patrol. He let them into his house, where McElroy came face to face with the reality of what had just happened to him.

“In the light, I was looking at myself in the mirror and suddenly I didn’t feel so well,” he recalled. “My hair had been burned off my head. The skin was hanging off my face. The thin leather gloves were melted to my hands. After seeing myself, I felt the pain and was scared.”

Both McElroy and Saulls were treated at Fairchild Air Force Base Hospital before being transferred to a burn center in Texas to recover. Eight weeks later, McElroy was back in the sky; Saulls flew again not long after. About that same time, McElroy returned to GU.

“I went back to all my teachers to see if I could salvage some of my grades,” he said. “I think I did pretty darn good.” His transcripts showed he carried more than a full load — calculus, chemistry, economics, philosophy, drawing, composition — and he earned top marks in them all. “My favorite course was logic,” he said. “I received a very well-rounded education and I can get along with just about anyone because of what I learned here. I even received wedding instructions from Fr. McNeil, the main chemistry professor then.” McElroy and Carol (Bambino), who was enrolled in the registered nursing program at Sacred Heart School of Nursing when the pair met in Spokane, were married in 1962. “Carol was Catholic and I wasn’t,” McElroy admitted. “So Fr. McNeil helped me.”

In 1963, McElroy graduated from Gonzaga with his degree in chemical engineering.  Throughout his more than 50-year career in chemical engineering and nuclear waste management, he was internationally recognized and highly respected for his work, for which he was awarded the Wendell Weart Lifetime Achievement Award by Sandia National Laboratory and WM Symposia in 2013. In true Zag fashion, McElroy has also been committed to contributing to his community, serving as the Chairman of the Tri-Cities Salvation Army Advisory Board and member of the Kiwanis of Richland, Washington. He also served on Gonzaga’s School of Engineering and Applied Science’s Advisory Board from 1990 to 2004.

“It’s amazing how the school has grown,” he said, adding, “it’s amazing what the basketball team has done, too.” An admitted “snowbird,” McElroy now splits his time between the Northwest and Arizona.  His wife passed away in September, 2015, not long after the couple celebrated their 53rd wedding anniversary.

Together with WM Symposia, a non-profit organization dedicated to providing education and information exchange on global radioactive waste management, McElroy has established the Jack L. McElroy & WM Symposia Endowed Fellowship in Engineering & Applied Science. This fellowship will provide financial incentives for students to become involved in research projects and professional conferences through the School of Engineering and Applied Science at GU, encouraging the same sort of creativity and excellence that McElroy has embodied throughout his career. McElroy recently received a lifetime achievement award from WM Symposia for his work.

Gonzaga is truly grateful for Jack McElroy as a member of the Gonzaga family, a leader in his field and an exemplar of Zag spirit — his truly soars.