The Most Meaningful Thing You Can Do

Arthur Dugoni (’47) didn’t choose Gonzaga University. It could be argued though, that the fates that brought him to Spokane did so with the knowledge that his experience here would have a tremendous impact on our community. It would also launch a 66-year marriage that led to seven children, fifteen grandchildren and seven great-grandkids, a truly remarkable career in dentistry and education, and nearly a half-century of generosity toward GU.

In 1943 the U.S. Navy was in need of trained, commissioned officers as part of the American military involvement in World War II. This need was answered by the V-12 Navy College Training Program, which enrolled students in colleges around the country for officer training. Dugoni’s participation in the program originally began at the University of San Francisco while he was finishing his senior year of high school. After graduation, he was transferred to Gonzaga University.

“It was a whole new world for me,” said Dugoni, “I was 17 going on 18 and I’d hardly ever left San Francisco. We were just kids. I was rather anxious about what the future was going to hold for me.”

Spokane presented many new and transformational experiences for Dugoni. He met and began courting the woman who would eventually become his wife and also fostered an enduring friendship with Father James Linden, S.J.

“He touched my life in remarkable ways,” Dugoni recalled. “He used to take very poor children out to the lake in the summer to barbecue for them. He would take me along and we would talk about God and about the world — he taught me to listen and ask questions to find out how people think.”

Fr. Linden was on the altar at St. Aloysius, when Dugoni married Katherine “Kaye” Groo, the young woman from the Logan neighborhood he’d met and fallen in love with during his short time at Gonzaga.  Even now, Dugoni carries with him many of the lessons he learned from Fr. Linden, namely, the significance of having an impact as a person for others.

“The most important thing you can do is touch the life of another person,” said Dugoni. “When somebody says that you made a difference — that’s more meaningful than anything.”

Dugoni himself has indeed touched many lives in his dental practice, as president of the American Dental Association, dean and namesake of the Arthur A. Dugoni School of Dentistry at the University of the Pacific and as a dedicated supporter of Gonzaga University. Over the past 47 years, Dugoni made more than 220 donations, many of which were in support of the V-12 scholarship he had a hand in establishing along with some of his classmates. 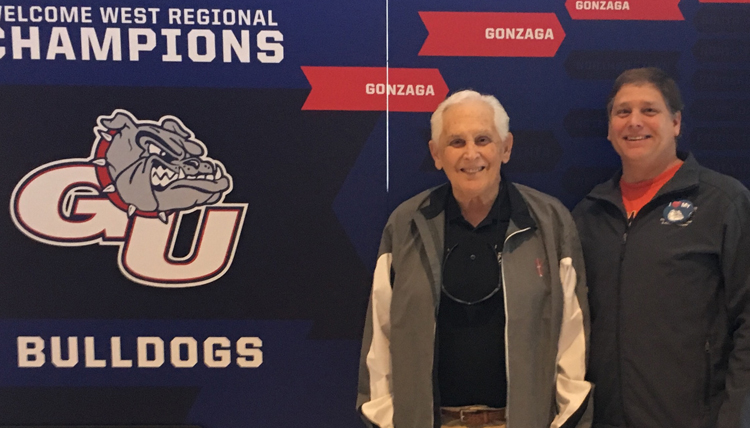 “My wife used to ask me, ‘Art, why do we write these checks every month — why don’t we just do it at the end of the year?’ and I’d tell her it’s my monthly reminder to be generous,” Dugoni explained. “I enjoy hearing from students who’ve received the scholarship I support and how much it has affected or helped their lives. I give and I personally mentor young people because it’s all very fulfilling to me.”

At 92 years old, Dugoni is still actively involved with the dental school that bears his name and is a devoted Gonzaga fan. He and his son, Jim, followed the Zags’ to the Final Four® in 2017, and he has every intention of continuing his support.

“Gonzaga is on the right road,” he said. “We need to do more scholarships and get more people doing more of them, too. I’m going to keep helping, and if I can do more for Gonzaga, I will do more.”