SPOKANE, Wash. -- As a sophomore and the star point guard of the Camas (Washington) High School Papermakers, Jake Hansel envisioned a world of opportunities when it came to playing college ball. But then that changed for Hansel, now a Gonzaga University freshman studying mechanical engineering.

The summer before his junior year, Hansel got an electrocardiogram that signaled a heart abnormality -- something that runs in the Hansel family. Initially, doctors told Hansel the condition could be something called "athlete's heart syndrome," a nonthreatening diagnosis in which the heart is enlarged due to exercise and rests at a lower rate than usual. Hansel was cleared to continue playing basketball at the beginning of his junior season.

However, further tests revealed he had hypertrophic cardiomyopathy, a disease in which the heart muscle becomes abnormally thick, making it harder for the heart to pump blood.

"I got my hopes up when they said it could be athlete's heart, so when the results came back and it was HCM it was a shock," Hansel said. "It can lead to bad things like heart attacks on the court. Usually, it's not as severe but there is no way to really treat it. The risk was too high to keep playing so I had to quit."

The diagnosis left a sour taste in Hansel's mouth at first but he looked for a silver lining. He found a way to remain a vital part of the team: he became an assistant coach and turned his diagnosis into an opportunity to educate others about the condition.

For his senior project, Hansel organized multiple events to raise funds to help spread the word about HCM, including designing a set of T-shirts that were sold at Camas basketball games.

So far, he has raised nearly $17,000 for Oregon Health & Science University's Knight Cardiovascular Institute in Portland. In addition, he has worked with the David Heller Foundation, named for a student-athlete from Portland who died at age 17 from HCM. 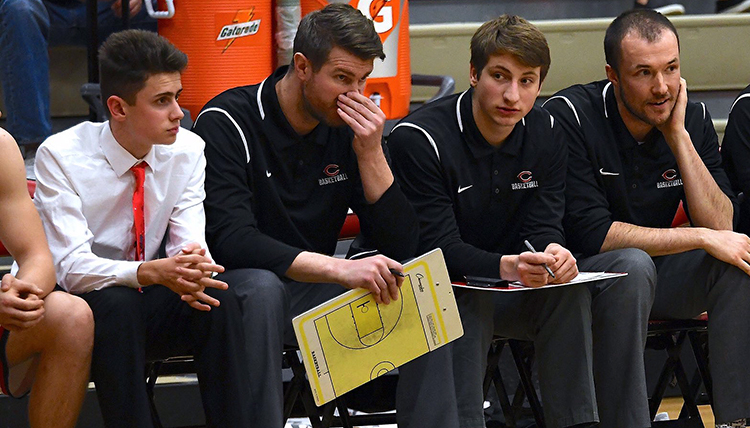 "We set up (the relationship with OHSU) over the summer going into my senior year and then people could donate directly to it," Hansel said. "Leading up to certain games we would sell T-shirts and wrist bands and auction off items people donated. All the money went toward OHSU and the certain niche I have."

Hansel's efforts have earned him the 2017 Berger and Green Heart Disease Scholarship awarded by a Pittsburgh-based disability law firm.

Hansel continues his efforts to bring awareness to HCM as a student in the Gonzaga School of Engineering and Applied Science.

"I have always wanted to do something that applies math and engineering. Gonzaga has a good school for it," said Hansel, who earned placement on the Gonzaga President's List last semester. Students must earn a 3.85 to 4.0 grade-point average to make the President's List.

In a different life, Hansel might have been one of the players on the court with Gonzaga's highly ranked basketball team in the McCarthey Athletic Center. Hansel has come to terms with that and is able to play hoops in intramurals -- at a more moderate pace and shorter durations. He would like to become a team manager for the Zags.

Still, Hansel admits that managing HCM can be a struggle -- one for which he's continuing to adjust.

"There are very little symptoms but I can just tell my heart rate is increasing when I do certain things," he said, noting he has become more cognizant and careful while exercising. "I'm supposed to do high reps and low intensity, which is fine."

Hansel acknowledges that competing at the highest levels in basketball is no longer a necessity for him, however he remains interested in the sport and open to possibilities.

"If I am able to manage and go down that path that would be awesome but it is not a necessity," said Hansel, who is enjoying engineering and beginning to think about his career plans. "I am sure I will coach when I'm older and be a part of it in that way with my kids but it's not like I have to."