Homes with a Heart

Though they may have graduated more than half a century ago, five members of the Class of ’66 never cease to exercise the Ignatian values that impacted them while at Gonzaga, particularly of being men and women for and with others. Joe Arbanas, Lee Ann (Hudspeth) and Ed Gottfried, Janine (Daly) Martin and Nancy (Vaubel) Bergman traveled to Cambodia in fall 2017 to help construct homes for two families during an international Habitat for Humanity build, and to explore Cambodian culture together.

While most teams have a “mastermind” behind their successes, the Class of ’66 has a “masterplanner.” Joe Arbanas, a retired human resources professional, has a knack for organization, especially when it comes to bringing together his classmates. Arbanas organized the class’s 40th and 50th reunions in partnership with Gonzaga’s Alumni office, and while those were spectacular, he and several members wanted something more: they wanted to make an impact together.

Arbanas wanted to involve his classmates in serving impoverished people in a global setting. He traveled to Indonesia in 2015 and to Cambodia in 2016 with Habitat for Humanity. After that, Arbanas was hooked, and decided that in his next build, he would put his organizational skills to good use and lead a Habitat team.

Janine Martin was the first to step up, saying Arbanas’ invitation was just what she needed at the time. “Something jumped out at me that I needed to do something for other people and for myself, to be a part of a team to do something good,” she shares. Lee Ann and Ed Gottfried were already familiar with Habitat work, as they had been to a build in Mexico City. Arbanas’ four classmates knew they would be in Joe’s capable hands.

The five Zags invited family members to join the effort, including Martin’s daughter, Denise Schmiedeknecht, who traveled from her home in Cape Town, South Africa, and Kelly Scott, who wanted to honor her deceased parents (’66 Sarene Crawford and Dave Scott) who both attended Gonzaga and were Peace Corps volunteers from 1966-68.

Exploring the “Land of the Khmer”

With little more than exchanged emails and logistical information, the team set out for Cambodia a few days before the build to explore the country and tour the area surrounding Siem Reap. The city where they would work, Battambang, was three and a half hours away by bus.

Together, the group traveled to Angkor Wat, an ancient Hindu temple with the largest religious monument in the world, to watch the sunrise. From there, they continued to tour Buddhist and Hindu temples, soaking up the country’s rich culture.

Additionally, the group visited an outdoor museum called the Killing Fields, which shed light on the effect of the Vietnam War in Cambodia. Many volunteers later commented that this visit gave them a greater appreciation of the dynamics of the Vietnam War through the eyes of the Cambodians. This was even the case for Ed, who served in the Vietnam War in the late ’60s.

On the team’s last day of sightseeing before the build, everyone took a cruise on Cambodia’s largest freshwater lake. A community of fishermen and their families had built houses on stilts above the water, producing an intersecting subculture of Cambodia.

Before departure, Martin was convinced she would not have the skills necessary to build a house. Her daughter Denise possessed a similar mindset, “I had never used a level before, had no idea what to do with a trowel, had never laid a brick or mixed cement before.”

Both women, along with the others, learned that building a house didn’t require technical knowledge as much as it required tenacity and a willingness to help. 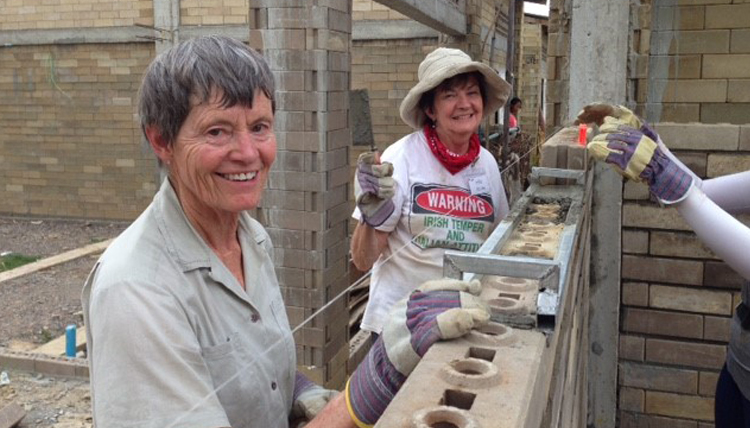 Most of this inspiration came from the two women for whom the houses were being built. Vory, a 31-year-old widow and mother to a 9-year-old daughter, sold grilled beef in baskets to earn the equivalent of $75 per month. Of that, $65 would go toward rent. The other house was for Sothear, a 26-year-old widow with two sons under the age of eight, who, up until her new house was completed, lived with her grandparents.

Every day, the Habitat volunteers were greeted by Vory and Sothear, who worked tirelessly alongside the volunteers, securing a more stable life and future for their families.

Side-by-side, everyone built. The houses were made of brick, which was produced from a machine that compressed dirt, sand and cement into strong, sturdy blocks. Everyone was responsible for spending some time creating bricks, or as Martin called it, “working in the brick factory.” The volunteers slung dirt, hauled wheelbarrows full of materials and carefully leveled walls that stood as protection for the families that would soon be living within them.

Not a single person complained about the back-breaking activities they endured. As Schmiedeknecht commented, “All of that sweat…carried little weight against the fact that each bucket of cement, each brick set, each pile of sifted dirt and every droplet of sweat was for those ladies and their children.”

Both houses were finished by the end of the week. With only 325 square feet and two rooms, these homes were substandard by American means. But for Vory and Sothear’s families, they were more than enough. According to Arbanas, housing is the first step to a better life. “Once people have a stable place to live, education, health and better jobs become more accessible.” 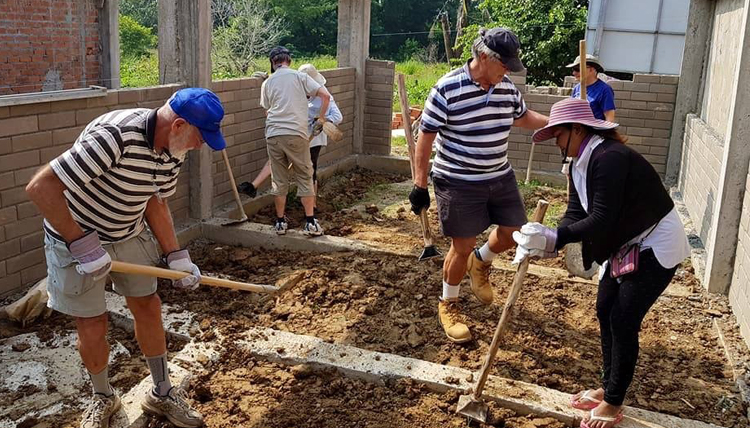 An Impact to Last a Lifetime

By week’s end, all volunteers were exhausted, ready to return home with calloused fingers and full hearts. But first, they celebrated. The two-hour-plus dedication ceremony honored the families, volunteers, local craftsmen and neighbors. But the feature was clearly Vory and Sothear’s gracious smiling faces.

Each volunteer brought home something different. For Arbanas, it was an understanding of the Cambodian culture. He believes part of the benefit of Habitat is its ability to be an immersive experience, not a spectator sport.  Volunteers become a part of a community, collaborating with families and local workers.

For the Gottfrieds, it was seeing the joy and appreciation from the women for whom they built the houses. “They were there every day before we got to the job site and were still working even after we left,” they say. “There’s no question about the smiles on their faces.” Martin agrees, “There was a lot of love.”

In the end, the group became one big Habitat family. Scott remarks, “We were connected by our life hardships and our successes…[and] together created a better life for two families that were so deserving of it.”

For some, Cambodia was their first build, but they all agreed it definitely wouldn’t be their last.