Every great achievement comes with a story of the people who made it happen. And if Mark O’Donnell is telling the story, you know it’s going to be good.

In September, Northwest Pilot Project presented Mark O’Donnell (’65) with the Agency Impact Award to commemorate his service to the organization, which provides affordable housing to seniors in Multnomah County (Oregon). O’Donnell began working with the project in 2015 after reading about the number seniors the organization had to turn away. Through sponsorship the Project's emergency housing fund, O’Donnell’s commitment has prevented 450 low-income seniors from becoming homeless.

He also partners with SE Works, De Paul Treatment Centers and other organizations that serve at-risk kids and low-income seniors.

After graduating from Gonzaga in 1965 and further schooling at Willamette University, O’Donnell has practiced law in Oregon since 1968, and founded O'Donnell Law Firm.

His connection to the community he seeks to help is deep-rooted. He grew up poor in Northwest Portland and started working multiple jobs in the sixth grade to help support himself along with his mother and three brothers. According to his law firm’s website, he was born into a family of alcoholics and “has experienced and understands the scars of abandonment, poverty, emptiness and anxiety, and continues to support organizations that seek to alleviate the adverse consequences of poverty, especially for children.”

O’Donnell left home at seventeen, working at a candy company and as a volunteer firefighter to save money. After hearing about Gonzaga from his high school basketball coach, O’Donnell took the train to Spokane with all his possessions in a single steamer trunk. Though his grades were good, he didn’t have enough to cover the first semester’s down payment. Without a guardian to sign his application paperwork, he recalls the moment Father John Hammond Taylor provided his signature instead and promised him a scholarship for good performance. In addition to giving back to the community he came from, Mark also donates generously to Gonzaga scholarship funds for students.

Though GU set the foundation for O’Donnell’s financial success, he considers his moral education and the University’s emphasis on service even more valuable. His mentors from Gonzaga include professor Dan Brajcich, Father Timothy O’Leary and Father Richard Twohy. O’Donnell remained close with Father Twohy, flying from Portland to Spokane during the last years of his life. To say that Gonzaga made an impact on O’Donnell’s work would be an understatement.

"I was just a poor kid with no business being there. Gonzaga changed my life."

O’Donnell said his generosity is a response to the resources God gave him. Referencing St. Ignatius, he said, “A pivotal point in our spiritual journey is when we come face to face with the emptiness in our own heart that can only be fulfilled by God’s love.” 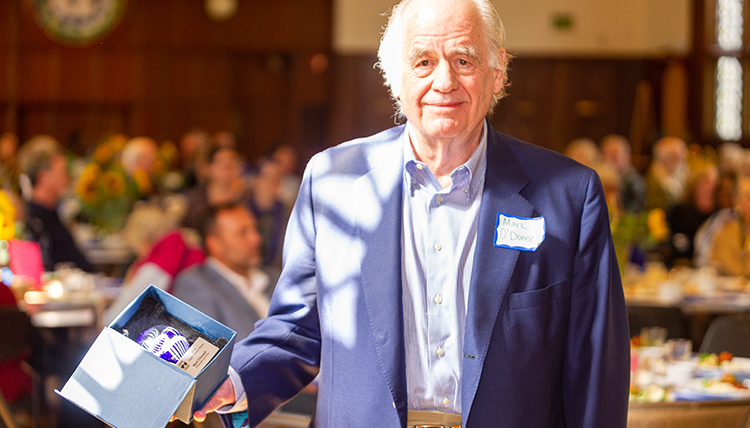 More information about the Northwest Pilot Project can be found at nwpilotproject.org.
Share Story