Weapons Against the Dark

Brian Doyle was the editor at Portland University magazine by day, essayist and author by night.  His books – including “The Thorny Grace of It and Other Essays for Imperfect Catholics” and “Leaping: Revelations & Epiphanies” – are humorous, painful and insightful reflections on faith and family and the journey of life.

I did not attend the Catholic university where I write these words, but I have worked here for 25 years, and there are days when I think I see something of the place and its people and poetry and possibilities maybe even more than students do; students are so thoroughly involved with growing up (or not), and thrashing after love and careers, and tiptoeing out from behind their masks and disguises, and cautiously (or not) trying to discover who they are, beyond where and who they are from, that I am not sure they have the time to see the college as an idea, a verb, a time machine, an imagination factory, a very profitable corporation, a cultural phenomenon, an evangelizing energy, a major employer, a farm for harvesting innovation, a vast verdant park, a tourist destination, an entertainment venue, and an extraordinary example of a company that sells something no one can see, smell, touch, or properly account for in other than generally ephemeral ways, if you steer away from such hard outcome data as jobs attained, marriages transacted, or acceptance rates to graduate schools.

The attentive student, of course, can speak more easily than I ever could of the secret corners of the campus, where students go to rest and recreate, unbeknownst to authority. Students can speak of hours of hilarity and heartbreak, of cool conversations and hot debates, of the best places to steal a kiss, the best places to catch a nap on a bright spring afternoon, the best places to leap into the river, the actual quietest hours in the library, the best times to shyly knock on a priest’s door in hopes he will listen to the shatter of your heart. Students can better articulate the exuberant roar of thousands of students at once at a game, the moment in class when you find yourself fascinated by something you never thought about before, the feeling of terrible loss when you shake your roommates’ hands for the last time as students, knowing you will never be such shaggy close friends again, no matter how close you remain as you age. 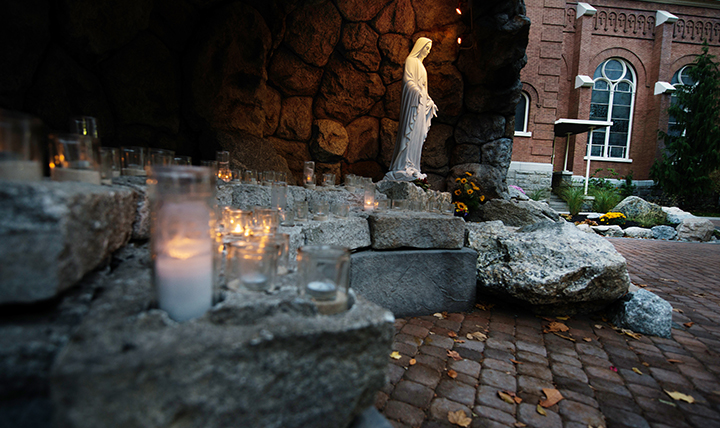 But I had more time than a student does, and I could shuffle about trying to see and smell and witness the silent campus; not just the halls and walls, but the small moments that aren’t. The sheer number of couples I counted holding hands one day, starting at eight in the morning and finishing at ten at night, when I finally went home 20, including one couple who were perhaps 80 years old, and walking home slowly, the woman small but upright, the man tall but bent. The number of priests walking with students on one day – not priests alone, not students alone, but priests with one or more students, generally with the priest cheerfully holding forth, but twice with the priest silent as the student spoke: I counted seven instances in one day, a remarkable number, if you want to measure a subtle Catholic thing at Catholic colleges. The wheedle of robins in spring, the faint croaking of cranes far overhead in fall; perhaps the older observer, more sensitive to the tidal rhythms of time, hears those songs more clearly. The student will sit near tears at one or perhaps two graduations; I have sat through more than 20, and each time marked the extraordinary seethe of emotion beneath the pose and pomp; each time I saw the proud parents, and knew them to be both thrilled and sad, that time had taken their toddler, and made of her this tall bolt of grace; each time I watched the faculty pretending to be bored, but they were moved more than they would admit by the sight of their favorite students, and how rarely the favorite was the one with the best grades; and each time I watched the college president, and knew him to be very much aware of his persona and his position, and of the proximity of the archbishop, but also, deep in his heart, amazed that his university was producing such amazing young souls, headed to the four holy directions, to pain and love, to joy and agony, to epiphanies and moments of fraught grace, of which he might hear one in a thousand, if he was lucky.

We shared the news and the weather, the students and I, during the years I have worked here, in an old brick hall, trying to catch and share stories that would say something true of the place and its people; we shared the snow and the rain, the events of the day, the issues of the hour; but while they saw and felt so much that I never could or would, I think I saw and felt some things they might come to only much later, when they too are gone from the campus a while, and can stand back and see the thing whole, a far greater thing than the lovely castles of campus, and the roar of the crowd at the gladiatorial tilt, and the entertaining capers and characters of their friends. The thing as a whole is an idea, even more than it is an entity; and the deep grace and beauty of the idea is that it doesn’t make much sense. The university exists to offer an education that may or may not open hearts and souls and minds; it is there to offer the peculiar idea that there is a love and grace far beyond our ken, that might well be the subtle road to peace and joy beyond your body’s adventures in this realm; it is there to suggest that beyond the job you may attain, and the love you may attain, there are deeper waters that have to do with humility and losing your ego and serving the most broken among us, for they are not only the children of that which we call God; they are, in some mysterious way, shards of that very Love and Mercy itself.

I would argue that the point of the Catholic university at its very deepest level is to be a means for the union of those shards, each to each; so that the best measurement of the quality of the school is no mere number, however glittering, but endless stories of how its people, over the course of many years, have brought light and hope and mercy to bear like weapons against the dark.

This essay appeared in the Spring 2016 issue of Gonzaga Magazine. Brian lost his battle with cancer in May 2017.