For ’05 Dan Futrell, being ambitious and involved comes naturally. Throughout his time at Gonzaga, Dan participated in cross country, track and ROTC; he even had the honor of acting as Spike the bulldog during the 2004-2005 basketball season. After serving two tours in Iraq and attending Army Ranger School, he attended grad school at Harvard. Now, he resides in Boston and works as a product manager for MediaMath, a technology company, and serves on the Somerville School Committee.

What his impressive vitae doesn’t show is his taste for extreme adventure.

In October 2015, Dan completed the Presidential Traverse. What’s supposed to be a two-day hike over 21 miles through 8 peaks of the White Mountains in New Hampshire took Dan and his roommate only one day to conquer. The adventure continued in late spring 2016, when Dan and a friend set out to do what no one had yet attempted – find the so-called “black box” of Eastern Air Lines Flight 980.

After taking off from Asunción, Paraguay on Jan. 1, 1985, at 5:57 p.m., Eastern Air Lines Flight 980 was scheduled to land in La Paz, Bolivia, at 7:47 p.m. Before it could make it to La Paz, though, the Boeing 727 struck the side of Mount Illimani at an altitude of 19,600 feet, making it the highest altitude commercial plane crash in history. Some analysts believe that the plane strayed off course to avoid stormy weather; other darker accounts involve a plot to blow up the plane because of contraband substances onboard. Regardless of the cause, the impact into the glacial tower was devastating; there were no survivors among the 19 passengers and 10 crew members.

Illimani means “water bearer” in Aymara, and the peak certainly lived up to this name. Twenty to 30 feet of snow covering the wreckage made investigation efforts in 1985 fruitless. It did not help that the plane’s remnants were strewn over several miles and were at an altitude even some of the most experienced climbers find extreme. After the turn of the 21st century, climbers on Mount Illimani found pieces of the plane that were revealed by the melting glacial ice. Personal items of the passengers were found, yet the flight recorder (aka the black box) remained unrecovered. As the ice continued to melt, it would only be a matter of time before it did emerge.

Enter Dan Futrell and his friend, Isaac Stoner. One lazy Saturday morning of poking around on the Internet led Dan to a list of unrecovered flight recorders, one of which was from Eastern Air Lines Flight 980. A little more digging through facts of the crash, and the pair decided to take on the feat of retrieving its black box. The reason for their quest? The adventure. The challenge. The danger. 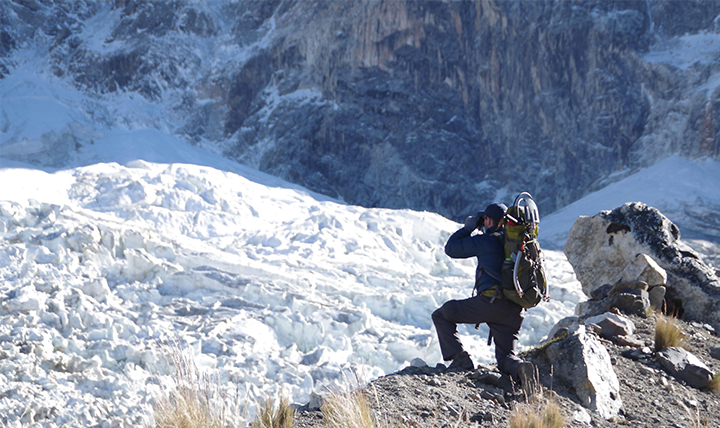 Dan and Isaac had no experience whatsoever in extreme climbing. All they had was two weeks’ vacation and determination. To prepare for their trip, the pair set to work training for five months before they even left for Bolivia, running stairs at the Harvard football stadium and sleeping in altitude tents. They never trained on an actual mountain, though. Time would only tell if this would be enough.

Fortunately, Dan and Isaac snagged a couple other brave souls to come along with them – Peter Frick-Wright (a reporter from Outside Magazine) and Robert Rauch (a German mountaineering guide who lived in La Paz). At least they wouldn’t be completely alone on the side of a glacial mountain.

Once they had their gear, Robert thought it best that the group practice emergency techniques on the ice and snow, as well as see how their bodies could handle the altitude. They packed up early and drove to Huayna Potosi, one of the three companion peaks around La Paz. Though the day of climbing, crawling and hiking was tiring, Dan and his crew felt optimistic about their expedition.

On May 21, the group of four, plus an Aymara subsistence farmer named José who served as their cook, embarked on their trip to Mina Mesa Khala, an abandoned tungsten mine at the base of Illimani. It would serve as the first base camp, where the five adventurers would sleep and eat for a few days at nearly 16,000 feet above sea level. On the drive up to the mine, the crew found that a rock slide had left impassable boulders in the middle of the road. Unable to drive around, the group employed porters from the nearby uranium mine to haul their gear up the two miles to Mesa Khala. Finally, Dan and Isaac could start to search for Flight 980’s flight recorder the next day.

For three days, Dan, Isaac, Robert and Peter searched the lower debris field for the international orange flight recorder. Though they didn’t find the mystical black box in this field, they found plane parts strewn over an area equivalent to four football fields. Some of these parts included seat cushions, life jackets, turbine engines, the internal frame of a wing, landing gear, an altimeter, hydraulic lift pieces and lots of wire. Many fragments were bright orange (a telltale sign of a plane’s recording device), and the crew did find a strip of magnetic tape, but still nothing to confirm the finding of the plane’s recording device.

The crew also found articles of clothing belonging to passengers and human remains, which they buried and marked with stacks of rocks. Though hard to imagine among rocks and pieces of metal, these were real people who lost their lives at the site. Finding the black box for Flight 980 became more than just solving a mystery – it became a tribute in part to the memory of those who tragically did not emerge from the wreckage.

Though the careful searching in the lower debris field yielded almost every other piece of the 727, no definite proof was found to confirm that Futrell and his guys had stumbled upon what they had come to find. They ascended onward to the upper field – a much more difficult climb over icy snow and near vertical terrain. Dan even mentioned on their first day climbing to the field what everyone else was thinking: “Are we in over our heads?”

As the fever to find the voice recorder continued, the altitude wore on the crew after 12-hour search days. Plane part after plane part yielded just that – plane parts. No black box, no shred of evidence that could help solve the mystery of the crash. Days spent scouring the debris fields left the men empty-handed.

Now back searching the lower debris field, the crew knew the next couple of days would be their last chance. One fateful night, before retiring to the tent for dinner, Isaac and Dan spent some time digging out a large metal beam from the rocks and ice. Unable to dislodge the beam, the pair resorted to searching for smaller pieces, just as they had done for most of the trip. And that’s when Isaac found it. The confirmation. An orange chunk of metal with a wiring harness on one end and a group of cables sticking out of it. Though crushed almost beyond recognition, one could still make out the CKPT VO RCDR painted on it. The crew had been finding pieces to the black box the entire time, and this was the final piece to the puzzle.

Would the black box and the magnetic tape answer the many questions surrounding Eastern Air Lines Flight 980? Only time will tell. Currently, Dan and Isaac are struggling to find someone with the right equipment willing to read the tape. Since the Convention on International Civil Aviation states that the country in which the plane crash occurred is responsible for the investigation, Dan and Isaac have to receive permission from the Bolivian government before the National Transportation Safety Board will explore the tapes. It might be a long wait.

Without any official data from the black box, Dan’s crew still came to a more logical speculation about what caused the crash: a combination of weather, primitive navigation equipment, inexperience and bad luck. The discovery of the plane’s black box has not put all questions to rest, but it has eliminated most of the conspiracy theories surrounding the crash. And, it’s given Dan Futrell and his friends a chance to live out lives of adventure, all while still being able to give some answers to those still heartbroken by the crash of Eastern Air Lines Flight 980.

Does Dan plan to undertake another similar adventure in the future? If time and money allow, he certainly does. Look for Isaac and Dan to be scaling the side of another mountain or searching at the bottom of the ocean or marching through the unpredictable foliage of the jungle in 2017.