For some, going to college is as much about partying as it is about studying. We take a look at current trends in alcohol use among students nationwide, and what Gonzaga is doing to help. 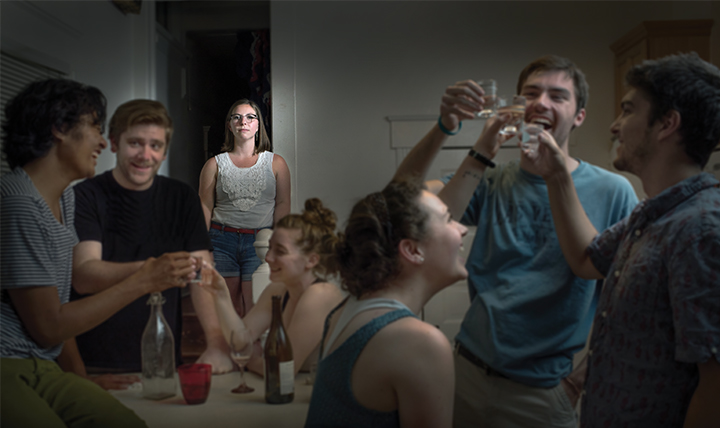 Molly Smith wasn’t having a good time. The party in 2014 was like so many others she’d attended. Music blared; students danced, talked and drank. For most, it was just another night of fun, a break from the pressures of school and work.

But Smith wasn’t feeling it. She was too drunk and too high.

That night she ended up at home, alone, long before her friends, like so many times before. “While everyone else was out having fun I was back at home feeling sick,” says the 20-year-old sophomore. That was when she realized something wasn’t right.

“I had an illness that needed to be treated.”

Alcohol, like it or not, is part of our culture. For many, it’s not a problem. They drink socially and in moderation. For others, moderation is impossible.

According to the National Council on Alcoholism and Drug Dependence, one in 12 adults in the United States suffers from alcoholism. While awareness has built over the years, the disease is still hidden and stigmatized. On college campuses, where roughly half the students can’t legally drink, the conversation is further complicated.

Gonzaga is no different. Alcohol consumption has for years been a part of student and alumni social life.

“I’ve had conversations with parents who say, ‘When I went to school, the priest used to bless the kegs before we all started drinking,’ ” says Jill Yashinski-Wortman, director for Gonzaga’s Center for Cura Personalis.

The image of alcohol and college being intimately linked is pernicious, if not exactly true, says Eric Baldwin, dean of student well-being and healthy living. Studies show that students vastly overestimate the percentage of their classmates who drink (see “False Norming”). That creates a false sense that the way to belong, in college, is to drink.

They Tell Us It’s a Party

The idea that college and alcohol are perfectly suited for one another is fueled by a pop culture preoccupation with drinking. “There are a lot of songs about, you know, brushing my teeth with a fifth of Jack,” Baldwin says. “The messages and the cultural norms that students are being bombarded with say this is what’s expected.” College especially is portrayed as an alcohol- and drug-fueled romp, a four-year respite from the restrictions of living at home and the impending responsibility of true adulthood.

But that, says Baldwin, is simply not how it works. “You can’t work hard four days and throw it all away for three,” he says. Habits established in college don’t magically end at graduation. Plus, how and why students drink has changed. “Having a keg and a bunch of friends sharing a keg or sharing a six-pack – those days are over. It’s now shots, lots of shots,” Baldwin says.

Smith’s drinking started freshman year at parties on the weekends.

During her sophomore year she bought a fake ID. She no longer drank only on weekends, instead partaking nearly every night. When this started to concern her, she limited herself to weekend drinking. That worked, for a time.

In January 2014, Smith started seeing a counselor through O.U.R. House at Gonzaga (see “Help & Hope”). “I went in not wanting to stop drinking completely,” Smith says.
But one evening in late January it became painfully clear that something had to change.

Molly had plans to go out with her best friend, Emily. Emily asked that she not drink too much. Smith agreed, but like so many other times, drank alone, before going out.

Smith ended up passed out on a couch, with Emily anxiously tending to her. For several minutes Smith was completely unresponsive. Emily was terrified, and angry.

“That night she told me she couldn’t take it anymore and that I needed to get help,” Smith says. “That was the moment I knew that I was an alcoholic and that I couldn’t drink anymore.” She started going to recovery meetings, and regularly attending O.U.R House sober events. These were places where she could let her guard down and feel safe.

“I really believe that our [sober] community isn’t small because of a lack of students in recovery. I think it’s small because students are intimidated,” Smith says.

The intimidation is twofold. Admitting you have a problem with alcohol is stigmatized. That’s compounded by the fact that, according to Smith, Gonzaga’s culture encourages perfection. “There is a lot of pressure on students to have it all together,” Smith says.

The various resources offered by Gonzaga’s Student Development and Center for Cura Personalis – O.U.R House, the Dream Office and the Student Wellness Center – have supported Smith tremendously. However, the fact that students hide their alcohol consumption shows that Gonzaga, like universities across the nation, still has work to do.

To Build a Community

Gonzaga is doing that work through Collegiate Recovery Communities. Although there is a host of programming and counseling services that Yashinski-Wortman hopes to implement, ultimately what students in recovery need is a social support system.

“They want to know that there are other people who are having the same struggles they’re having,” she says.

By creating a sense of community, Yashinski-Wortman and Baldwin hope to build a safe place where students can honestly address and face any alcohol issues they might have. Currently, Gonzaga partners with a local organization to provide professional substance abuse counseling to students, anonymous and free of charge. Additionally, Yashinski-Wortman and Baldwin are working to bring alcohol awareness education into orientation weekend, as well as providing more and better-publicized sober events.

As for Smith, she’s been sober since Feb. 1, 2014. She took spring semester off, but returned to Gonzaga in the fall. She notes, ironically, that if all goes well she’ll never have a legal drink. It’s a sobering thought, but she knows it’s her only option – an option made possible in large part by Gonzaga’s support. 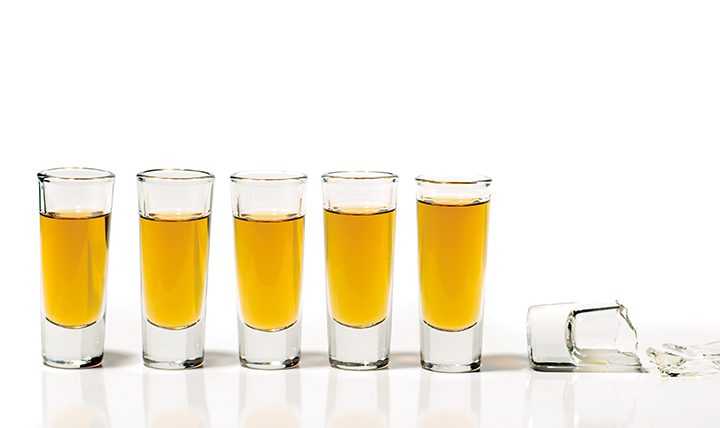 Movies like “American Pie,” “Animal House” and “Old School” would have us believe that American universities are essentially four-year-long parties. The reality of course, is more nuanced. Sure, some students party, but they also study, work out, go to church, perform in theatre or music ensembles and volunteer.

Still, the images we’re exposed to have a powerful impact on our consciousness, whether they’re true or not. Jill Yashinski-Wortman, director for the Center for Cura Personalis, calls this false norming. According to recent surveys 98 to 99 percent of students think every other student has drunk alcohol in the last 30 days; the reality is that 60 to 70 percent of students have.

That false perception poses a particular problem for students in recovery, or for those who recognize they might have a problem. If they think the only way to fit in is to drink, then they will be tempted to drink.

“We need to give them alternatives,” Yashinski-Wortman says. “And recognize they’re doing amazing work. To be in recovery at that age – and to have gone through all that – what an incredible thing.”

While college certainly does end, the habits established there don’t always slough away as you walk across the stage. For alcoholics the college environment may simply be hiding an ugly reality – one that stays long after the last beer pong game. Peaper (’64) experienced that firsthand. He came to college already an experienced drinker. His first three years at Gonzaga were, as he shares in an unpublished memoir, “the best of my life, up to that point.”

Alcohol helped him socialize. He was popular, had a “steady” girlfriend, lit up parties, went to class … and could outdrink most anyone.

It didn’t last. His voracious capacity for alcohol started to scare his more moderate peers. When he graduated from Gonzaga, a year later than his class, he was single and friendless.

“To be alone is not being by yourself, it’s being alienated by those you love,” he says. “That’s exactly what happened to me when I left Gonzaga.” He doesn’t blame them, instead admitting that he was an obnoxious drunk. “I think my actions tended to be very selfish,” he says. “I wasn’t the life of the party. I was just in the way.”

His downward spiral only accelerated post-graduation. In the mornings he’d have a glass of vodka. Soon his boss caught on.

Getting fired precipitated a lifelong journey, one he’s still on. Peaper’s been sober for 40 continuous years. He retired from a successful career with Boeing and has repaired the relationships he damaged as an undergraduate. Still, he considers himself in recovery – even after all these years.

On a recent visit to campus for his 50th class reunion, he visited O.U.R. House. “I saw what they were doing, and I was very impressed,” he says. Wishing he’d had access to a support system, Peaper donated to advance the cause.

That kind of support is hugely important, not just because it helps to pay for services students need, but because they see hope in people like Jim Peaper.

If you or someone you know may be struggling or need some extra support, contact the Center for Cura Personalis at 509-313-2CCP (2227), ccp@gonzaga.edu or www.gonzaga.edu/ccp