‘Legacy of the Kiln’ Opens March 22 in Arcade Gallery

SPOKANE, Wash. – The exhibition “Legacy of the Kiln: The Works of Terry Gieber and His Former Students” opens in the Arcade Gallery of the Jundt Art Museum on March 22 and runs through June 7. Gieber, who celebrates 31 years as a Gonzaga University art professor, is retiring this year and is being honored with a ceramics display by his former students, Sarah Beaty, Nash Calihan, Michael Janes, Ryan LaBar, Suzanne Lussier, and Dan Murphy. 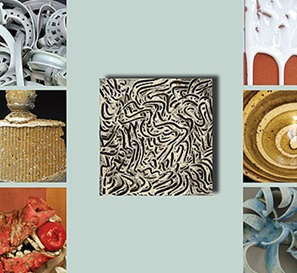 Gieber leaves a legacy of artistic and philanthropic contributions to the University and the clay world. His childhood in Kansas greatly influences his work in which he incorporates his awe of nature’s power in every clay piece he designs. “I think of landscape all the time,” Gieber says. “My work is always about the earth.”

Gieber has close connections with the Archie Bray Foundation in Helena, Mont., where he was Artist-in-Residence in the summer of 2002. His work in the ceramic tile industry led to his assistance with dozens of restoration projects throughout the United States. He served as art department chair from 1988-2012. His work is in private and corporate collections nationwide, including The Freisen Galleries, and U.S. Bank in Boise.

Throughout his tenure at Gonzaga, Gieber has shown extensively, including numerous one-man shows and invitationals such as “Crafts American: The West” at the Smithsonian Institution, Washington, D.C. Since 2007, Gieber has headed the “Empty Bowls Project,” which produces and donates 100 bowls to benefit the Candlelighters fight against cancer in children. Since 2005, he has worked with “Engineers without Borders” and “Potters for Peace” on water purification projects in Benin, Africa.

Gieber shared his knowledge of the natural landscape and clay design with students. “The patterns made by the plow and the springtooth are always in my work,” he said. Gieber displayed his first tornado jar, “Dorothy and Toto Jar” in 1989 at the Washington Centennial exhibit in Tacoma. The piece was 9 feet tall and leaned unevenly on the floor of the exhibit.

Murphy (’87) is an associate professor of art, ceramics, at Utah State University and has exhibited his work in 55 national exhibitions and has 22 years of experience firing wood-burning kilns. Beaty (’97) has served as a lecturer at Gonzaga and as well as in Alaska and Iowa, and worked as assistant project manager for restorative tile work at Quarry Tile Co. in Spokane from 1996-97. She lives and works in Fort Yukon, Alaska. LaBar (’99) is program director of the LH Project, a prestigious ceramics residency program in Joseph, Ore. Janes (’00) is the owner of Tongass Pottery works in Juneau, Alaska and creates gas-, wood-, and wood-salt-fired stoneware and porcelain. Lussier (’00), the artist-in-residence at Mendocino Art Center, employs every facet of ceramics from wheel throwing to hand building and mold making. Calihan (’04) earned his Master of Fine Arts from the School of the Art Institute of Chicago in 2008. Calihan lives in Chicago where he owns a catering business.

A free public reception for the exhibition and Professor Gieber will be held from 5-7 p.m., Friday, May 2.

The museum’s exhibitions are free and open to the public Monday through Saturday, 10 a.m.-4 p.m. The museum is closed Sundays and University holidays. For more information, please contact Karen Kaiser, curator of education, at (509) 313-6613 or via e-mail.