GU RoboSub is comprised of section teams: Electrical, Mechanical, Embedded Systems, and Mission Computer. Many of these members travel to San Diego in the Competition Team.

The GU Robosub Electrical Team is composed of students who are eager not only to apply what we learn in class, but to learn new things via hands-on experience with real world circuits. The Electrical Team works closely with the Mechanical and Embedded Systems teams in order to facilitate sensor and apparatus implementation.

So far we have successfully implemented a power distribution system, a thruster kill switch, a leak sensor, and wired communication between various sensors and components. We’re always looking for ways to improve Terrapene by adding new features and improving existing ones. Expand the sections below to see what exciting projects we’re working on right now!

The hydrophone project was designed to allow Terrapene to triangulate the location of a pinger in the pool. We built our own hydrophones in order to limit cost. The hydrophone was made by putting a piezoelectric in a PVC pipe bushing. A aux cable was then soldered onto the mic element and pulled out the smaller end of the PVC pipe bushing. A liquid tight cord grip was put on to the aux cable and screwed into the other side of the pipe bushing. A foam bumper was then put onto the side of the mic element that captures sound. Finally, a two part epoxy was used to fill in the pipe bushing in order to protect all of the electronics. The hydrophone was tested by putting the hydrophone into a sink with a waterproof Bluetooth speaker playing a constant tone. An oscilloscope was then used in order to see the signal and confirm that the hydrophone was working. A lm386 integrated circuit was used in order to amplify the signal coming from the hydrophone. The circuit was built in order to get a theoretical gain of 200V/V in accordance with the data sheet. This system was then tested in the pool where a gain of 500V/V was observed. This test was done using a dog whistle in order to test at higher frequencies and keep the cost of testing down. Before COVID-19 restrictions, our aim was to build a system that involved a push-pull amplifier and an arbitrary waveform generator using a cheap high frequency speaker in order to have more control over the frequencies at which we could test. To isolate the pinging frequency, the MAX 268 integrated circuit bandpass filter was used for experimentation. The filter has an adjustable centering frequency and bandwidth making it adjustable to a wide range of frequencies. The integrated circuit will be powered by the TM4C microcontroller, sending the filtered data to a general purpose input/output (GPIO) pin. More experimentation will be needed to explore its usability.

The sub is powered by three LiPO battery packs in parallel. Due to the nature of LiPO batteries, they have to be closely monitored to ensure that they stop being used before they reach critically low voltage. At best this permanently ruins the batteries and at worst it can start a fire.

Previously we have monitored the battery voltage via the mission control interface, but this has been inaccurate and cannot be done while in autonomous mode. To remove the need for a software connection, we are implementing a hardware low-battery indicator to flash an LED when the battery voltage drops below a threshold. We are also building a circuit that will cut power to the entire sub when the battery reaches a critically low level, so that even if the low battery indicator wasn’t seen, the sub will shut itself off in order to save the batteries. This will allow Terrapene to be used in a more autonomous setting without requiring constant supervision.

Being an autonomous robot, Terrapene occasionally comes up with its own ideas. One time we told it to follow an orange pole, and instead it started chasing a swimmer one lane over wearing orange shorts. When these things happen, we want a quick way to stop the sub. Since Terrapene needs to remain sealed, we use a removable magnet set against Terrapene’s hull from the outside to signal a magnetic sensor on the inside. When the magnet is removed, the relay providing power to the thrusters is shut off and Terrapene will float to the surface. Power remains connected to all other systems so that we can stay connected to Terrapene and figure out what went wrong without bringing down the whole system.

Terrapene loves the water, but the electronics in its hull really don’t. While leaks don’t occur often, they are not unheard of and we need to know when one happens. We built a Leak Sensor PCB using a milling machine that has connections for two water probes that will switch on an LED if either of them detects water. The board also has a signal output to let another circuit know that a leak has been detected. In the future, we hope to use one probe as a warning to turn on an LED, and the other as a critical signal to cut power to the thrusters, allowing Terrapene to float to the surface where its seal will be above the water line.

The embedded systems team is in charge of low-level control of the sub. From operating motors to interfacing with our RFID system, our team makes sure new and existing components can work with our sub. Whenever there is a new component added to the sub, it is our job to make sure the integration is seamless. We take the information from the mission computer and convert it into usable instructions for the motors and other devices. 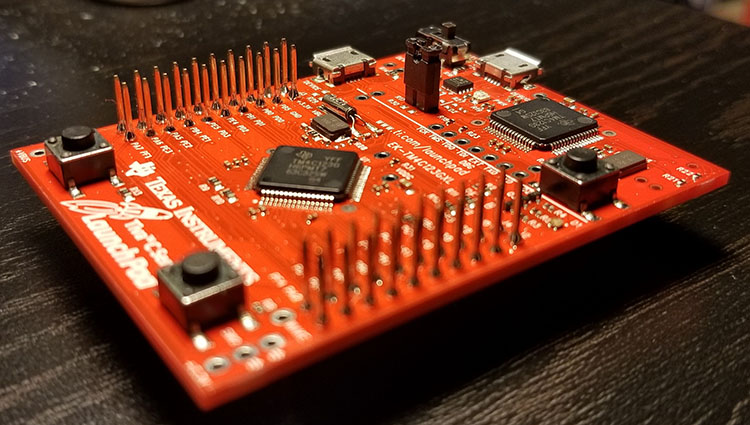 One of the challenges that we face with growing our embedded system is the amount of available pins on our current microcontroller. Therefore, to combat this and add more functionality to our system, we began experimenting with the DE0-Nano - Altera Cyclone IV FPGA starter board. With this board, we have implemented (using Verilog) a general-purpose PWM module and are currently developing a means of communicating with the board via UART. The PWM module is configured to accept a maximum period and width of 50MHz. The UART module is configured to have a baud rate of 115200 bits/second and uses 1 stop bit. The communication protocol designed thus far is made up of 5 bytes: 1 byte holding a command to indicate what the FPGA must do, and 4 bytes that contains data that it needs to execute the command. 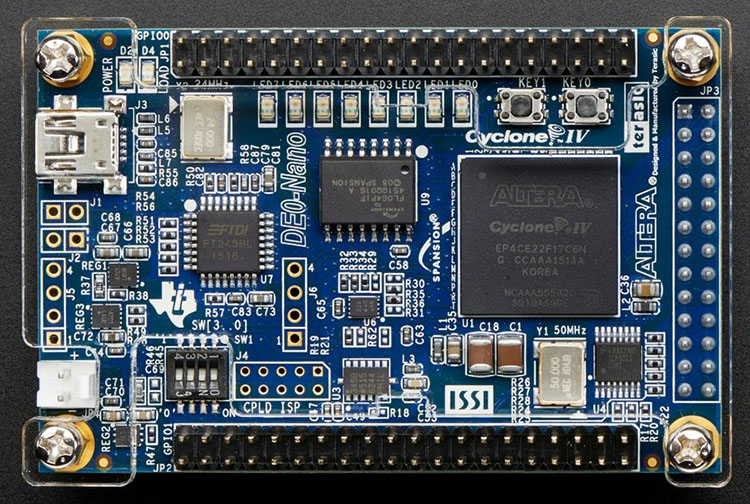 The Mission Computer team develops the “brain” of the sub, the program that interprets data collected by the camera and the embedded system and determines what actions should be taken. Additionally, the Mission Computer team works on the mission control platform, which is a standalone program that communicates with the sub over ethernet to display sensor readings and allow for the sub to be controlled manually. Currently, the team is working on triggering preset missions through RFID tags and testing compatibility with a new version of the mission control platform.

The GU Robosub Mechanical Team is a group of innovative individuals who have a love for design and hands-on engineering. Our team strives to design, build, and maintain the outer and physical components of the Autonomous Underwater Vehicle (AUV).

During the year we work together to participate in brainstorming, researching, calculating, and testing to achieve our desired properties of the sub. Whether it’s building a new AUV from scratch or innovating our most previous one, you can always find more ways to go above and beyond on the mechanical team.

We also like to give an emphasis on improving not just our submarine, but our students as well. Our club members get a unique opportunity to get a headstart on their peers in several helpful resources and areas. SOLIDWORKS, 3D modeling and Printing, certification to use the tools in the Manufacturing Technology Center, hands on experience with tools and building, leadership opportunities, and community service are all things that we have been able to do and help teach our members within the GU Robotics Mechanical Team.

The 2020 mechanical team experimented with adding a torpedo launcher to the sub, with the goal of being able to shoot a torpedo through the competition opening to score points. Initially, the discussion revolved around the propulsion system that would be used to fire the torpedo, and it was decided that the best option was a spring-loaded launcher. Materials, actuation, and the possibility of x-y axis movement independent of the submarine was also discussed at length before an initial design was created.

After the development of the initial design, a crude prototype was created using PVC pipe and spring. This small hand-actuated prototype was tested. Observations during this test were considered along with the complexity advantages associated with 3D printing, and PLA plastic was chosen as the material for the launcher exterior. The launcher in its current configuration is made of two separate printed parts joined by bolts, and the release mechanism is motor powered with the torpedo locked in a revolver type cylinder.

The main project for the Machine Learning team has been the Navigation and Control Model. We have been building a simulated environment in which to train and test a model to control the sub. This year's work consisted mainly of creating this environment using Gazebo, ROS, and Docker. This was made as a proof of concept in order to master the tools used, and to prove that it worked, we created some simple plugins to move a cube around the simulation space. We tested model creation, plugin creation, continuous integration via a Docker workflow, and developed a workspace using catkin.

Using the environment we built this year, we will be developing and training a model to control the simulated submarine using Gazebo/ROS. This model will likely be based on a reinforcement learning model, but we have further investigation and testing to do to determine the best approach for training and development. The goal is for this model to be able to replace and improve upon aspects of the current Mission Computer control system.

Each year GU RoboSub team strives to create an Autonomous Underwater Vehicle (AUV) that can perform against many obstacles at our yearly Robosub Competition and keep up with preparatory pool testing during the school year. Every summer we have the opportunity to participate in the international Robosub Competition held in San Diego. There we get to participate in genuine on-the-spot troubleshooting and get to gain a deeper understanding of how our teams have come together over the year and how to improve.

Given that we are a young team, we are very proud of our accomplishments over the past two years at competition. 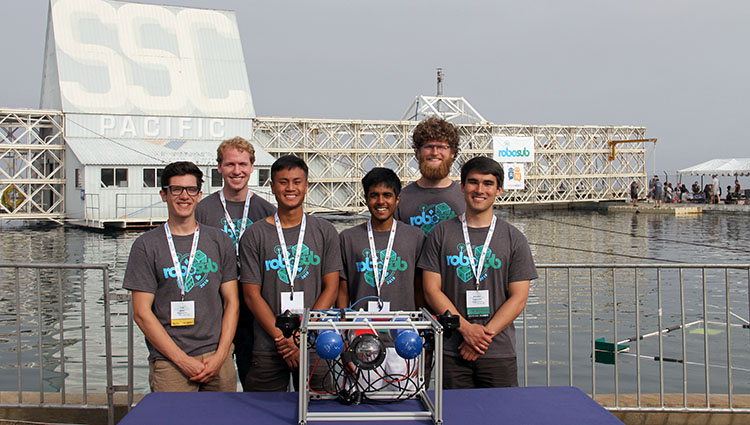 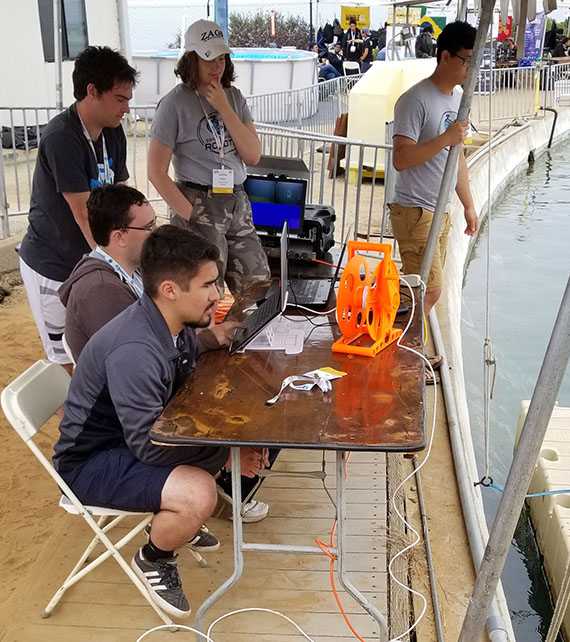