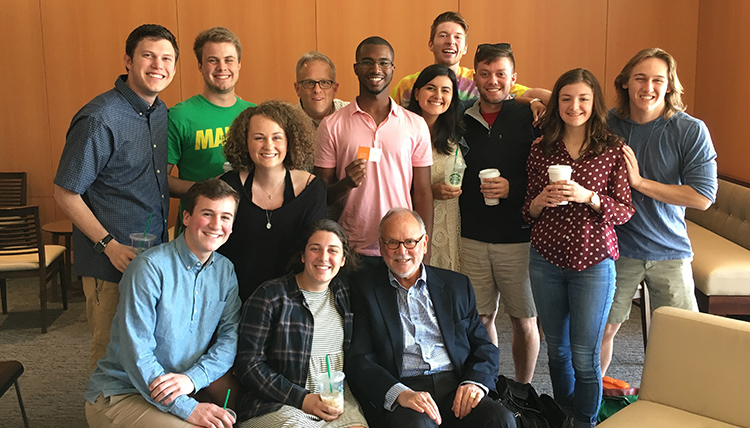 Hosted by CLP, the Leadership Over Lunch series brings people of regional interest and CLP alumni to GU to share their leadership journey with students, faculty and staff.

Ronald Reeves, Head of Diversity & Inclusion for AIG - Ronald Reeves is responsible for partnering with AIG's leaders, managers, and employees to design, develop and implement a sustainable and measurable Diversity & Inclusion strategy that focuses on talent, workplace and the marketplace, for AIG United States, Canada, Latin America and Caribbean. AIG has been named to the 2018 DiversityInc’s Top 50 List.

Latisha Hill, Director of Business Development for Avista Corp. and Senior Vice President for Avista Development, a subsidiary of Avista Corp. - Latisha Hills works to build economic vibrancy on behalf of Avista. She is responsible for directing the strategic development and operations of non-utility properties to maximize return and contribution to the broader regional economy. She has more than two decades of experience working alongside communities, driving economic development, and leveraging her specialties in regional systems planning and policy.

Eric Svaren - Eric Svaren is a leadership coach, though partner and teacher based in Seattle. Growing the capacity of leaders and organizations has been the focus of Eric’s career for more than 25 years. He has developed leaders, aligned teams, and facilitated turnarounds in national and local non-profits, health care, higher education, and government at all levels—producing organizations that are better aligned, more effective and resilient, and better able to “deliver their mission.”

Jerry White, Jr., The Spokane Riverkeeper - Jerry White, Jr. joined the Spokane Riverkeeper, a project of the Center for Justice, in 2014. He has been an advocate for fish and rivers for many years. To date, he has built partnerships that benefit the Spokane River. As a Riverkeeper, he creates programs that remove garbage, advocates for healthy river flows, works to stem pollution from runoff and protect shorelines. Jerry also continues to negotiate on behalf of the public regarding pollution from toxins that run into the river. The Riverkeeper provides eyes and ears for the public in making sure that laws and policies created to protect the river are followed.

Brian Schaeffer, Spokane Fire Department - Brian Schaeffer is the Fire Chief for the Spokane Fire Department.  His professional life has spanned nearly 30 years serving in Fire Departments in the Midwest in progressive ranks up to and including Fire Chief. He serves on numerous local and state public safety and health-related committees and has lectured on issues such as the psychology of Safety and Survival, Leadership, and high performing organizations. Aside from his family, his passion from an early age has been to contribute to the fire service. With 6-10 years remaining in his career, his focus is improving the safety for all firefighters from multiple perspectives including training, advocacy, and technology.

Kevin Del Rosario, CLP Alumni, Brand Marketing at Amazon - Kevin Del Rosario works for Amazon, in brand marketing. Prior to joining Amazon, Kevin spent 5 years in New York City where he worked in the advertising agency world managing brand marketing and social media for brands like Mercedes-Benz, Wal-Mart, and Kohl’s among others. During his time in New York City, Kevin was involved with New York Cares, a non-profit volunteer organization, and taught after school hip-hop classes to kindergarten-3rd graders at St. Mark’s the Evangelist school in Central Harlem.

Skylar Oberst, President of Spokane Interfaith Council - Skyler Oberst is President of the Spokane Interfaith Council, where he is credited with revolutionizing interfaith work in the Inland Northwest through the innovative Meet the Neighbors program. He serves as an ambassador and a Next Generation Leader to the Parliament of World’s Religions. He has spoken internationally, as well as at the White House on the power of interfaith work on college campuses.

Jim Sheehan, Spokane Developer and Entrepreneur - Jim Sheehan graduated from Gonzaga Law School in 1973 and worked for more than twenty years as a public defender in Eastern and Western Washington. After receiving a windfall inheritance, he decided to put his money to work for the greater good by founding the Center for Justice in 1999. Soon after, Sheehan invited local leaders and organizations to envision and launch the Community Building, a dynamic hub for local nonprofits. He also renovated the old Saranac Hotel, along with the Main Market Co-op, and Saranac Commons in order to offer affordable, beautiful homes for nonprofits and small businesses in downtown Spokane.

David Jobe, Chief Customer Officer of Winsight, LLC. - Winsight is the market-dominant, business-to-business media and information company specializing in the convenience - retailing, restaurant and noncommercial foodservice industries. David is a proven leader with over 30 years of experience, knowledge and proven results in building businesses. He has a track record fro developing and growing relationships critical for success through a clear focus on execution.

Ryan Bart, (GU 2012) - Ryan Bart is a magician and a current third year medical student at Western University of Health Sciences in Pomona, CA. For Ryan, magic is not about fooling people; but rather, it is about demonstrating the limitless potential we all possess. He worked with Magicians Without Borders starting during his Fulbright Scholarship year in Colombia. Ryan’s work with Magicians Without Borders has taken him around the world where he uses magic to inspire hope in our world’s most forgotten people

Christabelle Peech, Community Conservation Manager, The Hide Community Trust, Hwange National Park, Zimbabwe - Christabelle Peech was born and raised in Harare, Zimbabwe. In 2014, spurred on by the deteriorating socio-economic and conservation situation in her homeland, Christabelle proceeded to move back to her country of origin, determined to work on the ground and understand the difficulties that rural people faced living in a harsh environment where human and wildlife conflict was and is still very apparent. Since then, she has done exactly what she has set out to do, which is working on sustainable development initiatives in one of the poorest and most down trodden areas of the country. The reality that was realized is that animal conservation cannot be attained without community empowerment. The four main pillars of the work done entails education, women empowerment, food security and bridging the gap between humans and wildlife conflict.

Luke Baumgarten, Co-Founder of Terrain, the founder of Fellow Coworking and partner in Treatment, a creative services company - He’s a fiction writer and journalist whose work has appeared in Spin, Billboard, Willamette Week and others. Luke worked at The Inlander from 2005-2012, as a staff writer, Music Editor and eventually Arts & Culture Editor. He served as the Writer-in-Residence for Riverlit Literary Journal in 2014. In addition to Terrain, he serves on the board of the Spokane Symphony and the Gonzaga College of Arts & Sciences Advisory Council.

Howard Behar, former President of Starbucks Coffee Company International, author of “It’s Not About The Coffee: Leadership Principles from a Life at Starbucks.” - For 21 years Behar led Starbuck’s domestic business as President of North America, and he became the founding President of Starbucks International opening the very first store outside of North America in Japan. During his tenure, he participated in the growth of the company from only 28 stores to over 15,000 stores spanning five continents. Howard is committed to the development and education of our future leaders and has been a longtime advocate of the Servant Leadership Model.

Matt Santangelo (GU 2000) Executive Director for Spokane Hoopfest Association and Spokane Regional AAU Basketball Club and former Gonzaga Basketball Player - Basketball as a calling. Matt found his way to Spokane, Washington as a member of the Gonzaga University Men’s Basketball Program and graduated in 2000. Fast forward and Matt just can’t keep himself away from the sport he loves. Taking over the Hoopfest executive director duties in 2014, Matt has been the man in charge of making sure the magic of the largest 3-on-3 street tournament in the world continues through team execution of the many programs happening year-round.

Ranjy Thomas is the CEO of Flying Rhinoceros and a pioneer in the children's media industry. Ranjy's company , Flying Rhinoceros, is a leader in live interactive storytelling and immersive games for the web, mobile app and set-top box platforms. Featured in Entrepreneur Magazine's annual Young Millionaires edition, Ranjy Thomas is no stranger to the rags to riches (and sometimes back to rags) stories of young visionaries. Ranjy is also the executive director of Origin, a community of over 1,000 young professionals and college students from Portland, Oregon who are committed to helping people find a career that matched their strengths, talents and God-given calling.

Sr. Teresa “Tesa” Fitzgerald directs Hour Children, a nonprofit in Queens, New York, that serves incarcerated women and their children, building healthy, self-sufficient lives. The program is named for the hours that shape these children’s lives: the hour their mother is arrested, the hour children visit their mothers in prison, and the hour of their release.

Gollapalli Israel works among the Dalit caste – the untouchables – in the slums of Chennai, India. While India technically abolished its caste system, centuries of stigma remain. Traditionally, the only occupations open to Dalits are considered impure: tanning leather, butchering, garbage collection and manual scavenging – a term used to describe cleaning human excrement from latrines.

Brent McCann, a 2008 graduate of Gonzaga University and the Hogan Entrepreneurship Program, is the President of Liliir Education Project, a nonprofit organization whose mission is to provide education and build leaders in South Sudan. The LEP is working to improve the vast educational injustice and inequality in South Sudan.

Larry Spears is President & CEO of the Larry C. Spears Center for Servant-Leadership, Inc., established in 2008. From 1990-2007 he served as President & CEO of the Robert K. Greenleaf Center for Servant-Leadership. Spears had previously been Managing Director of the Greater Philadelphia Philosophy Consortium, a cooperative association of 12 colleges and universities in the Philadelphia area. He also served as a staff member with the Great Lakes Colleges Association's Philadelphia Center and with the Quaker magazine, Friends Journal, in Philadelphia, PA.

Ben Stuckart serves as the Spokane City Council President. Ben is a Spokane native and graduate of both Lewis and Clark High School and Gonzaga University. Prior to his election Ben had the opportunity to start Communities In Schools of Spokane County. Under his leadership the organization grew to a now half million dollar agency annually. Communities In Schools is a collaborative organization and provides services for thousands of Spokane's students each year. He and his wife Ann have a dog named Bella and reside on the South Hill. In his spare time he and his wife enjoy exploring the City on foot with Bella leading the way.

Brian Schaeffer, MPA, EMT-P is the assistant chief of the City of Spokane Fire Department in Spokane, Wash. He has 24 years of fire and EMS experience and has published numerous articles on air management, incident management teams in urban environments and fire service leadership. He is a current member of the IAFC, Washington State Chiefs and retired from IAFF Local 3133. He is currently pursuing his Ph.D. from Creighton University.

Hon. Mike Heavey served 14 years as a Washington State lawmaker and over 12 years as a Judge on the King County Superior Court. His work as a volunteer championing the innocence of Seattle neighbor Amanda Knox and Italian co-defendant Raffaele Sollecity inspired Mike get involved in the study of wrongful convictions in the U.S. and around the world.

Tom Veazey is a 2008 graduate of Gonzaga's Comprehensive Leadership Program and currently serves as the Program Director for Mama Hope, an organization that works in close partnership with local African organizations to connect them with the resources required to transform their own communities.