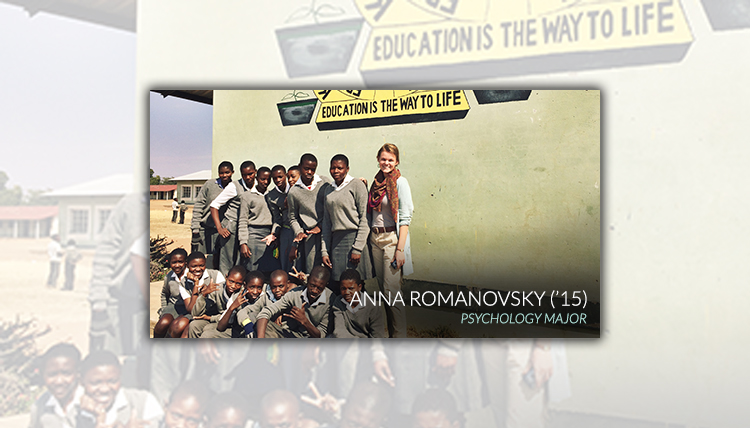 I graduated from Gonzaga University in May of 2015. By August of the same year I was on a flight to Namibia, a country I had previously never heard of, to serve as a Peace Corps Volunteer for two years (and two months, my mother always adds).

"Thanks to the education in psychology I received at Gonzaga I not only recognize the power of stereotypes but also understand how best to dismantle them."

Although my primary project is teaching English, I find that the most important work I do on a daily basis is breaking down stereotypes. Although Namibia gained independence from South Africa and its apartheid regime 26 years ago, the racial divisions are still apparent.

I am currently the only sirumbu (Rukwangali for white person) living in the small village of Kahenge with a wonderful family. I live in a hut, hand wash my clothes, fetch water, eat porridge with my hands, use a pit latrine, and bucket bathe. I am doing what many villagers could have never imagined a white would do. The breaking down of stereotypes starts with my everyday living. But it continues through everything I do, from running to teaching.

I try to go for runs in the evening as a way to unwind. When I started doing this, I encountered a great deal of confusion, as well as scared, crying children. Having never seen a white person before, many of the small kids ran away from me. That fear soon turned into a joyous choir cheering me on as I ran by. In their high pitched voices they cheered, “Sirumbu, sirumbu, sirumbu!” Now even the little ones who were initially scared to tears come to the edge of the path for a high five.

The other day, I stopped to greet the group of kids who gathered around me. As I leaned down to give the smallest one a high five, the children surrounded me and began to pet my hair and skin out of curiosity. They proceeded to share some of the English they had learned that day. Finally, they leant down to tighten my shoe laces and sent me off with, “Thank you teacher, see you tomorrow at school.” I am thankful that these kids now understand that not everyone who is different is scary.

Thanks to the education in psychology I received at Gonzaga I not only recognize the power of stereotypes but also understand how best to dismantle them. Along with a knowledge of the anatomy of stereotypes, the psychology department gave me the opportunity to learn from some of the best professors at Gonzaga. They now serve as role models for me as I learn to teach. These professors developed my psychological lens through classes like mindfulness, emotion, and the psychology of poverty and class. I often reflect on what I learned in these classes here in Namibia.

My Jesuit education has also greatly influenced my work. Gonzaga is where I not only learned how to serve others but also how to serve alongside others. It is where I learned to care for my whole being: mind, body, and spirit—allowing me to stay mentally, physically, and spiritually fit to continue my Peace Corps service.