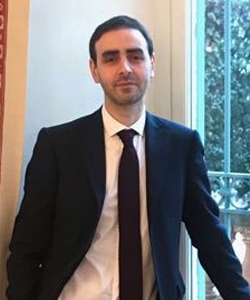 Marco Valbruzzi is currently an Adjunct Instructor at Gonzaga in Florence, where he teaches a seminar on the Italian political system. He is also a researcher fellow at the Istituto Carlo Cattaneo and at the University of Bologna (Department of Political and Social Sciences) where he works on a project investigating the political consequences of the economic crisis in Europe.

He earned his B.A. and M.A. from the University of Bologna. He has been visiting scholar at the University of California-San Diego (2008) and at the University of Sydney (2014) where he acted as Research Assistant for the Electoral Integrity Project (Harvard University). He was awarded the 11th “Celso Ghini” Prize by the Italian Society of Electoral Studies for the best B.A. dissertation (2007), the 5th “Carlo Maria Santoro” Prize by the Italian Political Science Association for the best paper presented at the Annual Conference (2009), and the “Young Researchers Prize” by the scientific journal Polis (2010).

Since 2015, he is co-chair of the Standing Groups on “Political Theory and Concept Analysis” and “Candidate and Leader Selection” of the Italian Political Science Association.

His fields of interest are: political parties, primary elections, comparative politics, Italian party system and political theory. Part of his research has recently been published in the European Journal of Political Research, Contemporary Italian Politics and the Italian Political Science Review. He is currently writing a book on the transformation of the preferential vote in Italy.