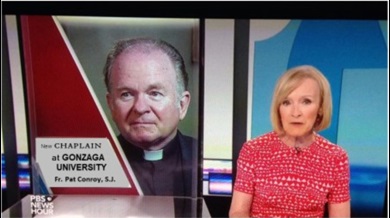 Fr. Pat Conroy, a Jesuit of the Oregon Province of the Society of Jesus, was born in Everett, WA in 1950.  When his parents divorced in 1958, he moved with his mother to Arlington, VA, where he lived until midway through his sophomore year in high school.  He then transferred to Snohomish (WA) high school where he graduated in 1968.

Fr. Conroy graduated from Claremont McKenna College in 1972, and attended Gonzaga University Law School for one year before entering the Jesuit Order in 1973.  As a Jesuit scholastic (seminarian), Fr. Conroy earned an M.A. in Philosophy from Gonzaga University, a J.D. from St. Louis University, an M.Div. from the Jesuit School of Theology at Berkeley (CA), and an STM from Regis College of the University of Toronto in Missiology.

During his years of training, Fr. Conroy did practice law for the Colville Confederated Tribes in Omak, WA, representing tribal members in state courts, he represented Salvadoran refugees for the Conference of Catholic Bishops’ Immigration Office in San Francisco while studying theology, and again worked for the Colville Tribes helping to develop the case for the Tribes’ treaty fishing rights in the mid 1980’s.  He has not practiced law since 1986.

After ordination, Fr. Conroy served 4 villages on the Colville and Spokane Indian Reservations from 1984 to 1989.  After a year of working for the national Jesuit Office of Social Ministries in Washington, D.C., he began a career of university chaplaincy, primarily directing student retreats at Georgetown University for 4 years, Seattle University for 3 years, and again at Georgetown for 6 ½ years.

Mid-year 2003 Fr. Conroy was transferred to Jesuit High School in Portland, OR, where he served as the superior of the Jesuit community for 3 years, and began a 7 ½ year stint teaching freshman theology and coaching the school’s Mighty JV II girls’ softball team.  During his time in Portland, Fr. Conroy also served for 3 years as the Oregon Province’s Provincial Assistant for Formation, having responsibility over the young Jesuits of the Province training for the priesthood.

In May of 2011 Fr. Conroy was nominated as the 60th Chaplain to United States House of Representatives by Speaker of the House John Boehner (R-OH), in consultation with Minority Leader Nancy Pelosi (D-CA), and was elected by the House and sworn in by the Speaker on May 25, 2011.  That ministry ended on January 3, 2021, and Fr. Conroy now works at the Office of Mission and Ministry at Gonzaga University as a campus minister.

Fr. Conroy was a competitive runner in college and for a few years after, a recreational runner for many years, and continues to have an interest in remaining physically fit.  He plays the guitar, and especially through years of retreat work has learned how to lead sing-a-longs, favoring Classic rock and roll.